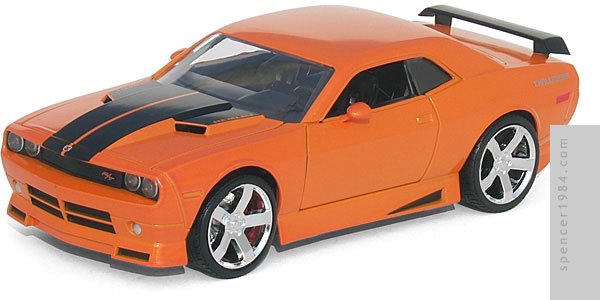 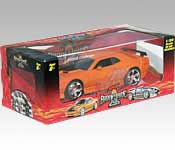 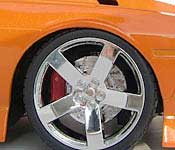 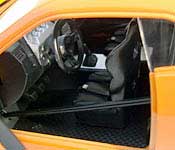 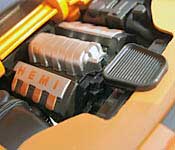 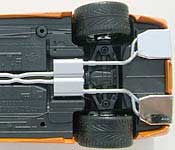 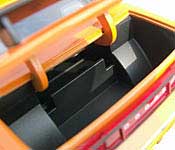 The Challenger is packaged in 1BR's usual fire-themed window box with clear panels at both ends and a large clear panel for the front/top of the box. For this wave, the 1BR logo in the bottom center is flanked by drawings of their Challenger and GT, with the now familiar logos and drawings of their Mustang and Corvette on the ends. The back of the box continues the tradition of featuring the car's specs (both performance and aesthetic modifications) and the engine speed/torque/horsepower graph (650rwhp and 600lb-ft@~5200rpm). A silver version of the Challenger seen on the front of the box is repeated to the right of the statistics block. The bottom of the box includes information about the current and previous waves, as well as the 1BR contact info and legal info. Inside, the car is held in place with two screws through the chassis, plastic stretch bands around the hood & trunk, and a twist-tie around the front axle.

1 Badd Ride has been hyping the Challenger as much as any car they've released, in part because of a new paint process. First, though, the casting: 1BR has been doing this long enough now to be able to do a nice clean casting, and it shows. All of the panels fit nice & tight, and look solid in both open and closed positions with no alignment issues at all. They even did a nice job minimizing the hinges as much as possible. The hood hinges are the only ones that really stand out, which is likely an unfortunate side effect of painting them bright orange. About the orange: the folks at 1BR call it "Candy Tangerine," and recommend taking it out in the sunlight to see the full effect of the metallic finish. After doing so, I have to give it to them: they were indeed able to recreate a realistically scaled metallic paint that captures the essence of a 1:1 show rod. The paint isn't 100% flawless - there are two tiny blisters in the driver's door and a rough spot on one corner of the rear bumper - but these are minor spots and don't detract from the overall appearance. Other paint applications are minimal and straightforward: two black stripes on the hood with "Hemi 6.1" in orange, black grilles & scoops, silver fog lamps, and "Challenger" in silver across the rear fenders. The side marker lights are all painted, though it's difficult to notice the amber front lenses against the orange body. The sideview mirrors are painted to match the body, with silver painted glass. The wheels and tailpipes are chrome, and the headlights & taillights are clear plastic with "Dodge" across the taillight panel. The interior looks great as well, with good detailing all around and a full roll cage that fits nice & snug against the edges of the cockpit. The seats, dash, and center console are all detailed as well, with silver painted inserts. Under the hood, the Hemi is simplified but captures the overall look of the 1:1 concept's engine. The only problem I see is that it's missing the duct between the air box and the intake manifold...the manifold clearly has a notch for something to fit into, so I don't know if it was ditched sometime during production or if I got an error car. The body paint under the hood is much lighter than the rest of the body, but I can't tell if that was due to a lack of paint or if it was an intentional design choice. Chassis detail is good, with a separate exhaust system and separate suspension components. The tires are back to having blank sidewalls.

The doors, hood and trunk open, and the front wheels can be posed. 1BR also gave the Challenger a fully functional suspension system (demonstrated in the top center picture), and did a great job of keeping it fairly realistic.

The Challenger follows the 1BR tradition of modifications that - while often outrageous - stay true to the look & feel of the base car. As such, it gets a little leeway in the "accuracy" category. The interior does sport a nearly stock dashboard & center console, and the rear seat appears to be stock as well. The engine also appears to be stock, and looks good aside from the missing duct noted above. One custom feature I have to make note of is the upgraded R/T hood, complete with open scoops. It would have been easy to make the hood solid and paint the scoops black, but the extra detail is a nice touch. Scaling is a bit small for 1/24, measuring out at around 1/25. The wheels are still oversized, about 24" in diameter if measured in 1/25 scale. As usual, the numbers have been bumped a bit, up from the concept's 425hp/420lb-ft.

The Challenger is a truly iconic car, and 1BR did a great job with their diecast version. The modifications all seem to fit well with the car, and it has several features (like the working suspension and open scoops) that remind me of the innovations found in the first 1BR cars. The Challenger is available in silver and orange, but if you're only planning to get one, go for the orange. Highly recommended.