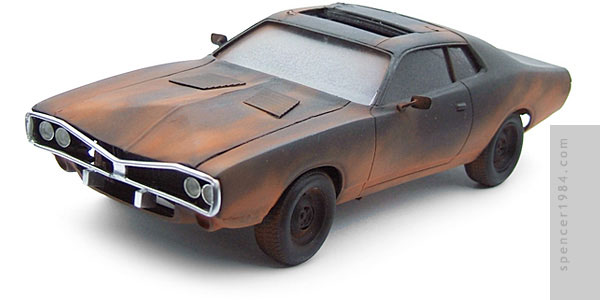 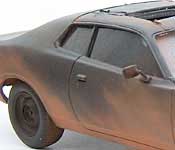 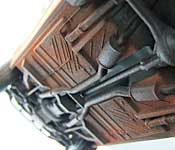 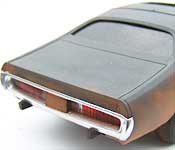 Cool Fact
Strangely, the characters in this movie knew that the car was a 1974 model year, but were never able to figure out the actual make or model.

This was a unique project for me in that pretty much the entire model was built from my parts box. I started with a leftover '71 Charger body, and reshaped the rear side windows, added the appropriate roof trim, and filled in the door vents to convert it to a '74 style Charger. I also cut out the roof and added a sliding panel just under the skin to make a functional sunroof. The hood was scratchbuilt from aluminum foil with 2-part epoxy applied to the underside for strength (the louvers are made from small scale clapboard siding). The front bumper was also scratchbuilt, from plastic rod stock. Sideview mirrors were leftover from my Lotus, and match what was used in the movie surprisingly well. The windshield was a leftover from some previous project, and the rest of the glass was made from clear plastic packaging material. The interior, engine, chassis, and front splash pan were all modified components from an old "gluebomb" '70 Barracuda that I had on hand. Some parts needed more work than others, but for the most part everything went together with no major problems. The WoT Dodge rides on wheels made from hardware store finishing washers and wheel centers out of my parts box. The only part I ended up missing and unable to satisfactorily scratchbuild was a rear bumper, but a fellow modeler was able to help me out by providing a used '71 Charger bumper. I removed the original taillights and made a set of quasi '74 lights from the edge of a CD jewel case.

The body and interior were painted flat black and heavily weathered with chalks, pastels, and conte crayons to achieve the abused look of the movie car. The chassis was even more heavily weathered, including multiple coats of paint to create the layered dirt effect. To get the dirty tinted glass, I lightly misted the inside of the windows with flat black, a technique I first tried out on my Speed Demon Chevelle. Although it's not the most technically accurate or detailed build in my collection, it was fun to do and I think captures the overall look & feel of the movie car.