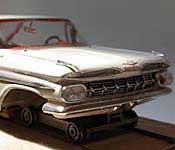 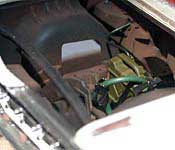 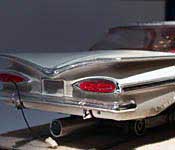 I think by now, nearly everyone has heard the story of the rocket car. I first read about it a few years ago, and since then have heard several versions of the rocket car story as it has transcended into the realm of urban legend. However, I believe that all urban legends have their origins in real life, and I definitely would not put it past someone to actually hop right into a JATO powered Chevy and drive it into a cliff. I found one web site (now defunct, here is an archived copy) that chronicles the events leading up to a rocket car, and what had happened to it. I have no idea of the validity of the story, but I found it entertaining, and decided to go ahead and build myself a rocket car based on that specific story.

I started with Monogram's '59 Chevy Impala Hardtop, and built the body & interior box stock (though heavily weathered, since this was supposed to be a car from a junkyard). I left out the engine, suspension, and drive train as per the story, and replaced them with narrow-gauge railroad frames made from sheet styrene and HO scale train wheels. Between the wheel sets, I built the brake described in the story from wooden coffee stirs and tire treads shaved from a vinyl tire. Under the hood is the brake coolant system, made from parts bin equipment and green wire to simulate the garden hose. The final detail was the JATO holster, which was simply a section of pipe with an end cap, and an "ignition" wired up to the Impala's taillights.

I knew that this had to go on a desert-themed base as soon as I started the project. I built the tracks first, by laying wooden ties and gluing HO scale rails to them. For sand, I needed something that was finer than regular sand, but coarser than model sand. Beach sand would have worked, except I don't live anywhere near a beach. I ended up getting what I needed at a local pet store, in their reptile section. Now my problem was how to glue it down. I have never had luck with trying to glue down sand, and I have not read anything about how to do it (at least, not in the scale and quantity I was working with). What I finally found to work without clumping or altering the appearance of the sand was ultra-hold hair spray. It bonds the top layer of sand together, forming a pretty solid crust that will not deform. Unfortunately, it only affects the top layer, so it will not take abuse at all. That was not really a problem here, as most of the surface was going to be covered by the car. The display case I used to construct the diorama was originally a Beanie display case from CVS Pharmacy's Rudolph the Red-Nosed Reindeer Christmas promotion; large enough to hold the '59, and with a lip around the base to hold the sand in place.