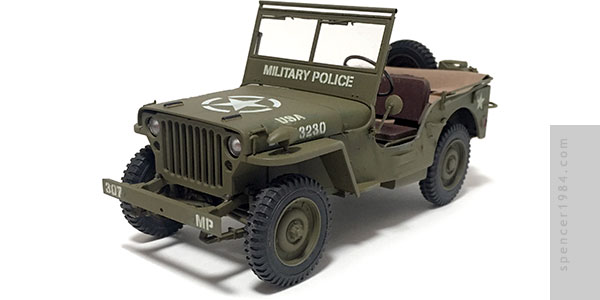 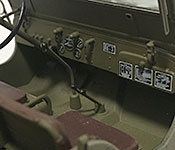 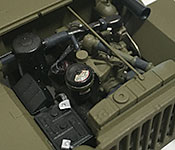 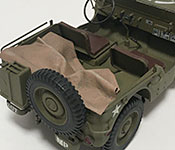 When I built the Dirty Dozen Jeep, I goofed applying one of the decals: I had put the hood star pointing towards the windshield, as is standard, but that movie Jeep had the star upside down with the single point towards the grille. I hadn't realized my mistake until it was too late to fix, and really didn't want to destroy the decal or repaint the hood. So I swapped out that hood with one from another Hasegawa Jeep I had and kept working. Seeing as I was now left with parts of a Dirty Dozen project, it seemed fitting to finish this build as something from Dozen's (very loose) 1978 remake, The Inglorious Bastards.

Now that I was familiar with this kit, it was pretty simple work. Most of it went together box stock, though the chassis-to-body fit was no better here than it was last time. The decals were, fortunately, much improved over my previous experience and went on with no trouble whatsoever. Either I got a dud last time or the kit was far older than I realized, but either way I was happy to see this level of quality.

Aside from the same wiring and plumbing I did last time, I made a few modifications to help this better match the movie Jeep. The wiper cranks, pipe across the top of the windshield, and top irons were scratch built. The collapsed top was made from pieces of gaffer's tape, rolled and folded to look like canvas then painted Apple Barrel Territorial Beige. I filled in the holes on the side of the body where the axe was supposed to be mounted, left out the back seat, and cleaned up where the rifle was supposed to be mounted behind the windshield. The thing on the front fender is a bit of a mystery. It's where the blackout light is normally mounted, but is shaped completely wrong for any light I've been able to find. It looks more like a siren, which makes sense on an MP Jeep, but is on the wrong fender and has some sort of half lid over it. My best guess is that it's part of whatever life the Jeep had between the end of WWII and the start of filming. The extra bar across the windshield frame and lack of a back seat could suggest a fire Jeep, with the thing on the front fender a siren. Regardless, it was shaped from round styrene stock and mounted where the blackout light normally sits.

At some point the jerry can went missing from this kit, though I still had the handle and cap so I know it wasn't used in another build. So I sourced the can from an MPC Jeep, and upgraded it with the parts I still had. It worked pretty well, though I needed to modify the handle a little to fit the new can. I also lost one of the hood latches, and so replaced all four with a set of 3D printed parts.

As with the others, this was painted Model Master 1911 Olive Drab. The markings are a combination of kit-supplied graphics, custom art, and Archer transfers. It was given a light weathering in the usual spots, including a little green over the markings to tone down the stark white color and some gray on the tires.