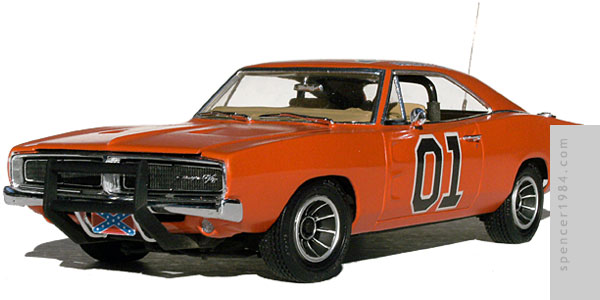 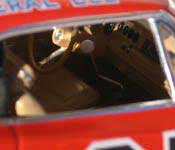 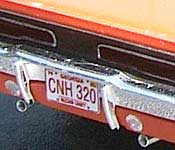 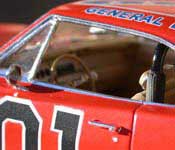 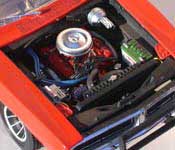 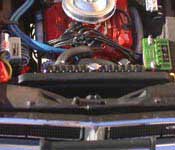 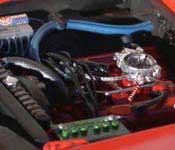 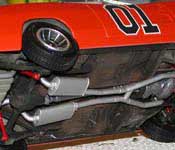 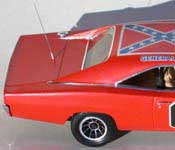 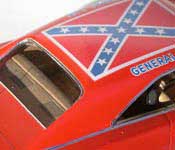 From its first appearance in 1979, the orange '69 Charger from The Dukes of Hazzard has become a cultural icon. Only cars like KITT or the '66 Batmobile have achieved similar popularity, and only Christine has been able to duplicate the General's regenerative abilities. Considering how many Chargers gave their lives for the production of the show, there was some wiggle room as far as specific details when I started work on this.

I had bought an AMT General Lee model several years ago, only to discover the numerous problems with that kit. So I did what most other modelers did, and bought a Revell '69 Charger as the base for a conversion. I highly recommend that course to anyone else considering a model of the General.

The first part of the kit I worked on was the engine. The stock 440 was painted the appropriate color using Duplicolor's engine enamel, and fully detailed with wires, hoses, fuel lines, and linkage. Just for the fun of it, I made the air cleaner removable and detailed the top of the carb. The chassis was also pretty close to stock, though I did modify both the front and rear suspension pieces to give the General the correct stance. Once assembled, everything was appropriately weathered.

There were a few release marks on the interior tub that needed to be cleaned up. Once they were filled and sanded, I reapplied texture to the carpeted areas with a coat of Krylon's Make it Suede. All the interior components were painted Tamiya Light Sand, and detailed with Bare Metal Foil. The roll bar was scratchbuilt from plastic rod stock, and surgical tape was used for the padding. I also replaced the shift lever with a more appropriately scaled piece, and scratchbuilt a CB radio for under the dash. Finally, everything was lightly dusted with chalk and charcoal.

The body was first prepared by removing the vinyl top texture, side marker lights, and fender trim. I also discovered that the edges of the hood had to be sanded a little to fit properly. When the bodywork was done, every component was painted Hemi Orange by Model Master. It was then detailed with Bare Metal Foil, decals from the AMT kit, and custom blue-lettered "GENERAL LEE" scripts. I would've used the wheels from the AMT kit as well, but they had already gone to my Hoist model. As long as I needed new wheels, I went ahead and got an AMT Eckler Corvette so they could be even more accurate to the 1:1 car.

Once assembled, the rest of the chassis and engine bay details were added and everything was weathered to give it the proper "Hazzard County" look. Final details include a scratchbuilt grill guard, show-accurate front and rear license plates, and a scratchbuilt set of "Dixie" horns.