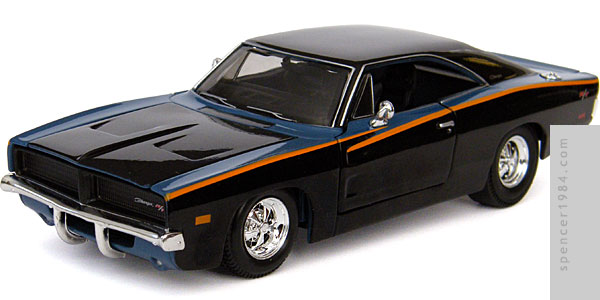 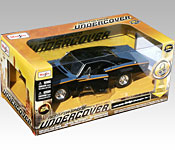 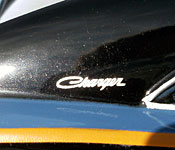 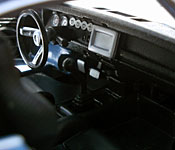 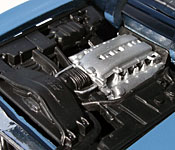 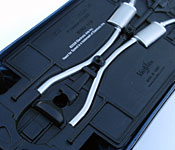 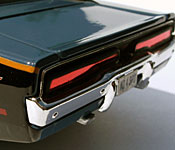 Undercover was the 12th installment in the Need for Speed franchise, and featured the largest open world setting of any NFS game to date. The game sets up the player as a police officer who has gone undercover to infiltrate the criminal underworld of Tri-City, and must complete various vehicle-themed missions to progress. As the player progresses, new cars become available - including the '69 Dodge Charger R/T, a Tier 3 vehicle that becomes available when the player reaches Wheelman Level 9.5 (out of 18 Levels). By entering "qlcukc4bqm" in the "cheat codes" menu of the PC, PlayStation 3 and Xbox 360 releases, players can also unlock a blue & black version of the Charger.

All of Maisto's 1/24 scale Need for Speed: Undercover vehicles are packaged in window boxes featuring gold/bronze artwork to tie them to the game's packaging. The top panel has only the game title, Maisto logo, and age restriction against the gold sky. The front panel repeats all of these, and adds the EA logo, a choking hazard warning, multilingual marketing copy (including a large arrow promoting the secret code inside the package), and a cityscape. The scale, make, and model are printed on a sticker attached near the bottom right corner of the panel. Both end flaps have the title, Maisto logo, and cityscape around smaller windows. The back panel repeats everything found on the font panel, but the individual items have been rearranged to take advantage of the increased real estate. The bottom panel has all of the legal information in white on a plain black background. The insert has a simple yellow/orange fade with Need for Speed: Undercover on the back panel. The car is held in place with two screws that go through a plastic tray that also holds the left door open, and the hood has a plastic band holding it closed. There is a sticker on the underside of the insert with the cheat code.

This is an older casting from Maisto, but overall the quality is still very good. The body is smooth & straight, panels line up correctly, and there are very few parting seams or casting defects. The paint is very clean, with a generally smooth finish and sharp edges defining the colored panels. I question where some of the details are placed: the front markers look high and the sail panel scripts look low, for example, but since this is a custom car these may have been intentional alterations. Everything matches side to side, and the only flaws I see are a hiccup along the trim over the left rear window and two small chips around the right front wheel opening. All of the other trim—including the windshield and side window trim, vent window trim, a "Charger R/T" on the grille, "Charger" on each C pillar, "R/T" on each rear fender, "R/T" on the rear panel, and the NFS logo over the rear window—are flawlessly applied. As a result of the way the paint was applied, there are blue outlines around the grille and side windows. The windows are a smoked clear plastic without any scratches or deformities, and the bumpers, mirrors, fuel cap, and rear panel are plated chrome. "Need for Speed" is written in black text at the top of the rear window, and the rear license plate reads "ND 4 SPD." The bulk of the rear panel has been painted flat black, leaving the edge and taillights chrome (the taillights were painted with a transparent red). The wheels are aftermarket chrome mags, holding treaded front tires and narrow slick rear tires. They look great, but the left rear axle mount was not properl snapped into place, so the car sagged in that corner until I fixed it.

The interior looks great, with two custom bucket seats up front and a racing-style tub in the rear. The door panels, dashboard, and center console are good representations of the stock 1969 Charger components, with the addition of an aftermarket tachometer and GPS screen. The steering wheel, pedals, and GPS screen are painted silver—which are all clean but not very flattering—and the gauges are printed with detailed late-model gauge faces. These really look great, the only downside being that Maisto only did the dash gauges and not the extra tach. The engine is a Dodge Truck V10 (differing from the Viper V10 with a higher intake and single central throttle body), simplified but still very recognizable and cleanly executed. The chassis is even more simplified, with painted dual exhausts but otherwise minimal detailing.

The hood and both doors open & close, and the front wheels can be posed (but are not attached to the steering wheel and return to center when released). The trunk was an opening panel on previous versions of this car, but the hinges have been modified to remove this feature. The lid is still separate, so there is still a small amount of movement, but any attempts to force it open will result in damage to the car, personal injury, or both.

Unfortunately, this is the Charger's greatest failing. First, the diecast car has a modified body, with the stock Charger's rockers pulled out into nearly vertical skirts. The front end has also been dropped and squared off under the bumper, making it much heavier than it should be (while omitting the front spoiler but retaining the bumperettes removed from the NFS car). The tires should be stock diameter but wider, it should have wider versions of the factory mags, it lacks the fender vents found in the game, and it has one too many sideview mirrors. Even the paint scheme is different: in the game, the black side panels follow the Charger's character line down to the door coves, follow the outline of those coves to create a scalloped leading edge, and leave a blue band along the rockers (similar to the paint scheme made famous by Dick Landy on his '68 and '69 Charger dragsters) The game also does not have the orange stripes along the beltline. It looks great, but misses the car shown in Undercover in several respects. Scaling is a pretty good 1/25.

I'm torn on this one. While Maisto did a technically solid job with it, it only bears a passing resemblance to the Charger that actually appears in the game. Normally I dislike manufacturers using inaccurate castings simply because they have a license and want to milk it for everything they can, but for some reason this one doesn't bother me as much. Maybe it's because I have less of a personal investment here, or maybe it's because this model fits the overall aesthetic found in Need for Speed: Undercover, but this model doesn't bother me as much as it should. If it doesn't bother you, either, then it's worth picking up. If you want a truly accurate replica, though, look elsewhere.