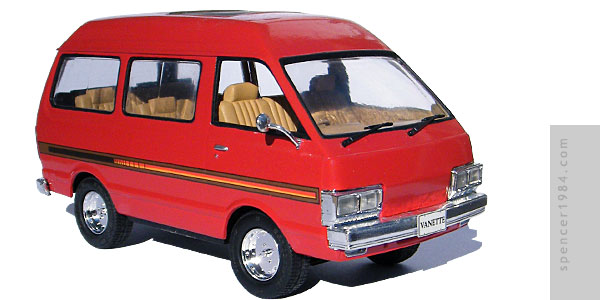 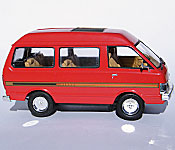 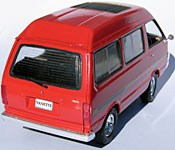 After literally years of looking, I was finally able to track down a Nissan Vanette kit. Other than the Ligier JS-11, this was probably the most difficult kit to track down, having been out of production for nearly 20 years. It was well worth it, however, since the end result is nearly perfect for Ironhide.

The model is built totally box stock, even the decals were included in the kit. The only change I had to make was to Bare Metal the bumpers, which were black in the kit but chrome on Ironhide. Colors are pretty straightforward, red over suede with the necessary detailing.

This was actually a pretty complex kit, considering the size of it. It was set up for an electric motor, lights, opening side and rear doors, and moving seats (the front center console folded down, the middle left seat folded up, and the middle right seat folded down and rotated to face a table installed between the middle and rear seats). Many of these were discarded for my particular buildup, but it was interesting to see how complicated Nitto made this kit.