At the Edge of the Universe: Strange Company's Adventures/Episode I. the First Meeting Wow, I Like It! 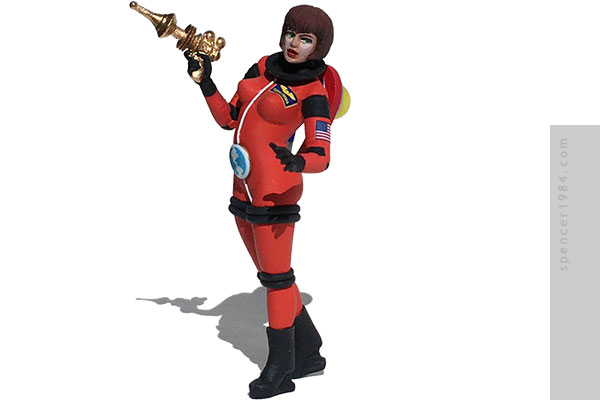 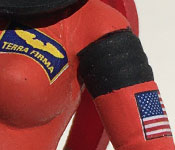 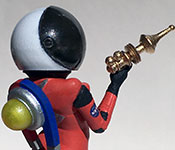 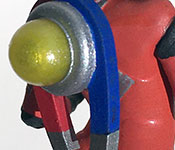 The Outer Space Men (a.k.a. "Colorform Aliens") was the brain child of toy inventor Mel Birnkrant, first appearing in the late '60s with a series of eight bendy figures that could be used with Mattel's Major Matt Mason figures. They were based on the planets of our solar system, with characters like Alpha 7, the Man from Mars; Colossus Rex, the Man from Jupiter; Xodiac, the Man from Saturn; and so on. In 2008, the series saw a resurgence with all-new sculpts conceived by Birnkrant and realized by The Four Horsemen. Among these was Terra Firma, the first character from Earth and the first female character of the line.

Completely unrelated to any of that, I've finally decided to branch out into figure modeling and am slowly working my way up the learning curve. Since I'm still pretty new to the concept, I like working with less expensive figures so my mistakes aren't quite so costly. Among these are the 1/24 figures by Master Box, which hit a good balance of sculpt and price, plus they come in a very familiar styrene so I'm more comfortable with what glues and putties will work with them. The one thing I'm not really big on, though, is some of the poses they use. They tend towards very specific actions, in some cases resulting in odd or clumsy appearances. One of these was the set titled "Wow, I Like It" from their Edge of the Universe... series. The robot-playing-grabass was a bit too eye-rolling, so I skipped it at first. But then I thought back to The Outer Space Men and Terra Firma, who shared more than a few traits with the android waitress Ivet. Now I had an idea *and* a way to stretch my limits a bit.

I started by doing all the basic assembly work, save for the head and right hand. The seams and many of the details were filled in, then the boots were built up using styrene tubing and putty. The right hand was supposed to be holding a tray, so there wasn't much I could do with it. Instead, I replaced it with a hand from an Atelier iT figure that was holding weapon grip with the trigger finger extended, then blended that into the arm. The suit's collar was a piece of wheel from my parts box that fit with just a little reshaping. The disk on her front was a thin section of round stock, sanded to create a slight dome. A set of grooves were cut in her legs for the accordion-style joints, and another thin groove was cut for the zipper on the front of the suit. Once all the prep work was done, I sprayed everything with Tamiya's TS-98 Pure Orange. The zipper was a piece of white coated wire, and the boots, gloves, and arm joints were painted Apple Barrel Matte Black. The leg accordions were made from small O rings, which fit into the grooves to create the illusion of flex joints.

The markings on the suit were all custom decals I drew up in Illustrator, combining Birnkrant's concept drawings, the finished figure, and real space suits. Once these were applied, everything was sprayed with a layer of Dullcote. The head was then modified to reshape the hair a bit, and painted with a combination of Apple Barrel and AK Interactive paints.

The final details were her helmet, gun, and anti-gravity pack. All three were 3D items I drew up and had printed at Shapeways. The gun was pinned to her hand and painted Testors Gold. The helmet was polished as smooth as I could get it, then sprayed with Tamiya TS-71 Smoke and TS-26 Pure White. Finally, the pack was painted with more Apple Barrel colors for the magnet, Tamiya XF-16 Flat Aluminum for the housing, and the dome was colored using a yellow Sharpie to retain its translucent appearance. Ivet's back had a mechanical flex panel cast to it, so I painted it and the base of the pack with a Silver Sharpie to make it look like a wearable pack rather than the uncomfortable-looking protrusion of the original toy.