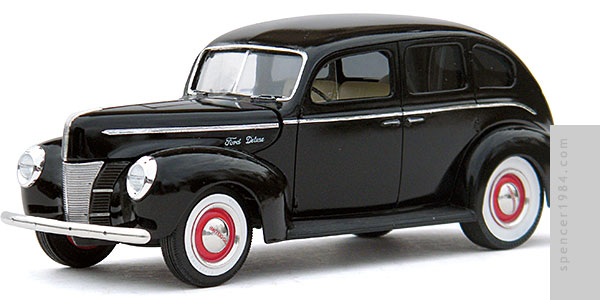 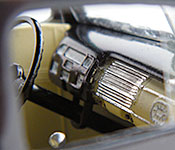 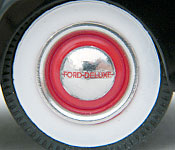 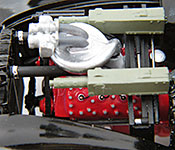 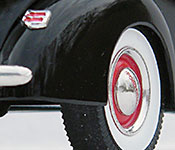 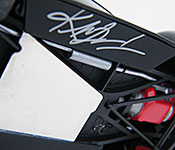 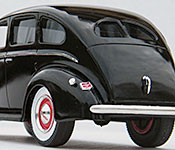 Cool Fact
Ken Lashley envisioned The Silver Spectrum as a nonlethal superhero who used her status as a mixed-race woman to slip below the radar of everyday life.
Source: The Internet Movie Database

New York Comic Con 2013 was a good one for gearheads: not only was Lola there, but just a few rows over was another spy car from the then-upcoming The Silver Spectrum. Sadly, the plans for a comic series didn't pan out as planned, and the whole project got shelved indefinitely. Still, the idea and the car were too cool to forget about.

This started as the same kit as my 1944 Batmobile. It's a relatively simple tooling, but comes together pretty nicely for its age. The only real problem was the body, which was replaced with a 4-door sedan body from R&R Resin. With all of my parts gathered, I got to work.

I wanted to keep things as close to period-correct as possible, which negated using the LT1 engine that was in the prop car (as with the Fast & Furious cars, I have the luxury of being able to use whatever running gear I want to, regardless of theoretical cost or practicality). Instead, I used the kitt-supplied flathead with a centrifugal blower from The Parts Box, similar to the VS-57 I built for the aforementioned Batmobile. This meant replacing the intake manifold with one from the Revell '40 Ford, then scratch building a new breather, generator, drive belt, and intake tubes. The carburetors were from Replicas & Miniatures of Maryland, oriented to create a sort of ram-air induction from the cold air in front of/above the radiator.

The chassis needed a few adjustments as well. The rear suspension was raised to the correct stance, and a set of parts box tires replaced the ones supplied in the kit (which looked great, but were too wide to fit inside the rear fenders). In retrospect I should have gone with slightly wider front tires, but these don't look too bad - I'd just like an even more aggressive look from the front. In keeping with the "spy car" concept, I added a skid plate to the bottom to act as protection as well as to contain various pursuit countermeasures such as a smoke emitter or caltrops.

I removed the bumperettes from both bumpers, smoothed the resulting bumps, and refinished them with BMF. I also used BMF for the hub caps, since AMT's '40 Fords are somewhat notorious for losing their chrome and I didn't want to have black splotches in a few years. The trim rings were BMF applied directly to the rim, since neither the parts from this kit nor those in Revell's '40 Ford fit these wheels.

Revell's kit was able to provide the steering wheel, though, which was a much better looking piece than the AMT version. I added flocking, a styrene rod steering column, and a floor shift, but otherwise built the interior box stock (I didn't try to turn the tub into a 4-door design since the rear windows were going to be tinted and the seat hid any possible views through the front windows).

Everything except the windshield was made from clear sheet, and the rear windows were laminated with automotive tint to give them the correct darkness. The body was also modified with deeper panel lines, hatch outlines on the hood, and headlights, taillights, and the trunk latch from Revell's kit. The window frames, side trim, and grille were all finished in BMF, and the "Ford Deluxe" scripts on the sides of the hood are decals from Lindberg's release of this kit.

The final detail I wanted to add was a set of guns under the hood. The flathead is a much taller engine than the LT1, so the system used on the 1:1 car simply wouldn't fit here. After trying a few ideas, I worked out a scissor lift system: when hidden, the guns straddle the supercharger, but when activated they rise and move closer together. I did not make this system functional, but I tried to get the math close enough and add enough detail so that it looked correct. The guns themselves are the Browning M2s that came with AMT's Batman Batmobile. I had originally planned to replace the barrels as I did on that build, but the prototype had truncated barrels to help it fit under the hood. Since space was a premium here, too, I went ahead and cut the barrels short then finished them with a set of crimp beads to act as muzzles.

Finally finished, the Ford went down to NYCC2015 where I was able to share it with the Silver Spectrum's creator Ken Lashley and get his autograph on it.