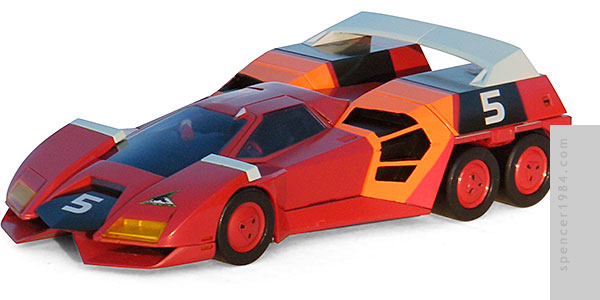 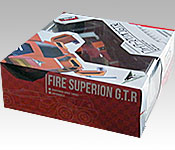 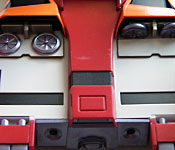 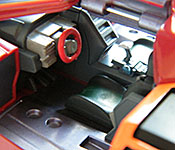 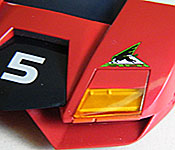 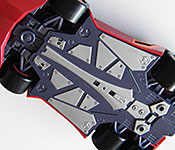 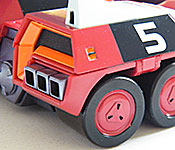 In the far-off future of 2015, artificially intelligent computers called "Cyber Systems" have been installed in Formula racers to help improve racers' abilities and reduce accidents on the track. Naoki Shinjyo is a highly successful F3 Champion who makes the switch to Cyber Formula. His attitude gets the better of him early on, though, costing him finishes and the primary Aoi Team position until Miki Jounouchi gives him a reality check. Shinjyo goes on to dominate the next race, until his Fire Superion runs out of fuel and stops just 100 meters short of the finish line. Recalling an earlier incident from his F3 days with less-than-stellar equipment, Shinjyo exits the car and pushes it across the line, ending the race with a 5th place finish and renewed respect for himself and from his team and competitors.

The package is a square cardboaard box, approximately 10¾" (27cm) on a side and 4" (10cm) deep. The window is an irregular diagonal slash across the top and opposing end panels, with a large portrait of the Fire Superion and its logo on one side of the window and the name, stats, and "Variable Action" logo on the other. The text and photos are oriented in such a way that there is no "front." One of the side panels with the window continues the portrait of the car and repeats the Aoi logo and stats, while the other one has the series' logo, stats, and Mega House/Sunrise logos. These panels are all printed in white, while the other two side panels are dark red to reflect the Fire Superion's primary color and have line art and full detail drawings of the car under its name and stats. The bottom has multiple photographs of the model along with detailed views and descriptions of its features. It also has all of the legal and contact info. Inside, the car is sandwiched between two clear plastic trays and a printed background that mimics the starting grid of a race course (with painted numbers on the pavement). The trays are taped together, but nest so securely that the car and accessories can be repackaged easily. The Fire Superion is placed in the tray on a gray display base that includes the car name, driver, and number printed in white. The four fan inserts are packed in four small indents. The base and car are keyed to each other, but not fastened together. Overall this is fantastic packaging: it looks good, protects the car and accessories, displays nicely, and is easy to open and re-seal for storage.

Overall the casting is very good, with nice sharp edges and tight panel fit. That said, it's not perfect: there is a rough sprue connection point on the left rocker, the topmost left scoop has a small divot near the outer corner, and the wheels are somewhat loose at the ends of their axles. Most of the body is cast in a soft-feeling plastic. The upper doors and roof/windshield are cast in transparent blue, and the fog lamp covers are cast in transparent yellow. The chassis is metal, providing some extra heft to the car. The interior is a tiny 2-seater, but the size is believable when you consider that it's a car driven by someone used to Formula cockpits.

The paint is similar to the casting: very nice, but a few missteps hold it back from being perfect. These include a run in the orange on the left booster engine and some white feathering where the front and rear spoilers meet the main body (most likely from extra cyanoacrylate gassing out during assembly). The bulk of the body is dark red, including the wheels. A light bluish-gray is used for the mirror housings and rear spoiler; black for the number fields and intake/exhaust screens; orange for the sections around the primary intakes and exhausts; silver for the hood scoop, chassis plates, and mirror lenses; lavender for the roof detail; metallic gold for the corner markers; gunmetal for the six square exhaust tips, accessory fans, and chassis; and white for the numbers and the panels exposed in boost mode. The cockpit is a combination of the same gunmetal used for the chassis and a medium flat gray, with dark gray seats with green inserts and silver seat belts, a blue boost handle, and red and white detailing on the gear select, steering wheel, and AI interface.

A matte black base with sharp white lettering and beveled edges is included, and like the car the printing is sharp and has no problem with opacity. The Fire Superion itself converts from race mode to boost mode by pulling the top rear sections of the car apart, then rotating them up and out. Doing so exposes recessed areas that accept one of two fan configurations: vertical for thrust, or horizontal for lift. Both gullwing doors open, but the driver's door is a very tight fit and must be moved very carefully. As noted above, the six wheels are not very firm on their axles and so flop around a bit more than necessary. This is especially a problem for the front wheels, which rub against something inside the wheel well.

Given the animation style (and limitations) when Future GPX Cyber Formula came out, this looks far more intricate than the animation model ever did. That said, it is an excellent "real world" interpretation of the Fire Superion, from the overall shape to the boost mode conversion. The extra detailing further enhances the look, befitting the "enhanced Formula racer" aesthetic. Scaling is a little tough to pin down, but it looks accurate next to other Formula racers.

A very good if not perfect representation of the Fire Superion. The overall shape is excellent, and barring a few minor missteps the fit and finish are very good as well. Recommended.