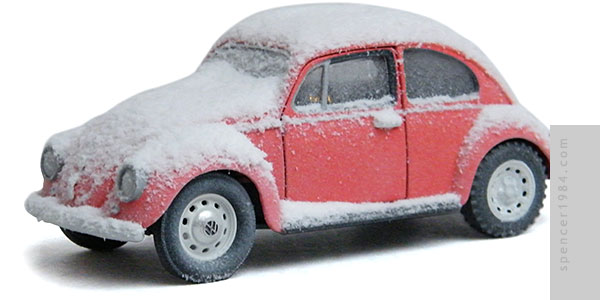 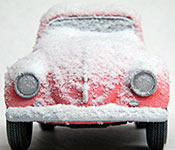 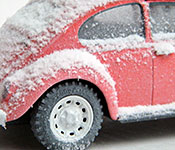 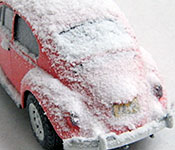 In my review of the diecast, I noted that GreenLight missed a few details that would have made this a truly accurate Gremlins replica. The rest of the car was actually pretty good, so I wanted to make the effort to fix those few problems.

I started by disassembling the VW and removing the headlights and rear axle. Making sealed beam headlights was a pretty simple job, with bezels made from short sections of styrene tube and parts box lenses. Changing the rear wheels was only slightly more complex, but I'm pleased with how things worked out. GreenLight cast the wheels in such a way that the "inside" of these looked very much like what was on the "outside" of the rear wheels in the movie. So I cut off the axle mount, drilled the centers so the former hubcaps could act as the new wheel spacers, and made new hubcaps by taking foil copies of the wheel centers from Revell's '32 Ford. The optional off-road tires from MPC's Pacer made decent snow tires, which fit on the VW wheels with just a little trimming.

The only other change I made with the car apart was to add side windows (I didn't bother fixing the seats or steering wheel, since the final look I had planned would leave these nigh impossible to see). My first plan was to simply glue clear plastic to the inside of the door, trim it to fit the window frame, and call it a day. But when I tried a test fit, I found that GreenLight had made the vent window post only half as thick as the rest of the window frame. It looked better, but made my first idea impossible since it would have left a gap between the post and the glass. Instead, I had to be a little more precise and cut the glass to fit into the opening...it took a few tries, but ultimately worked.

Once the car was back together, I addressed the bumpers. Fortunately, GreenLight had cast them as solid pieces. This made cutting off the front bumperettes easy since I wouldn't have to do any extra filling, and it meant the rear bumper had enough material to easily drill in to. The front bumper was refinished with BMF, and the rear bumper bars were made from floral wire. The last detail change was the license plate, from the movie title logo to a vintage NY "JJD-84" (director Joseph James Dante, and the release year of 1984).

With all this done I had a pretty decent replica of Billy's VW, but there was still one thing missing before it really looked like what we saw in Gremlins. To give it that proper New York winter look, I started with some mist coats of Dullcote and flat white around the bottom of the car. I then built up several layers of Woodland Scenics' Scene-A-Rama Snow until I had something that approximated the fresh snowfall covering we saw in the movie. I've used Woodland Scenics products before, but this is the first time I've tried using one of their winter effects. It did not disappoint - they have such a high reputation for a good reason.