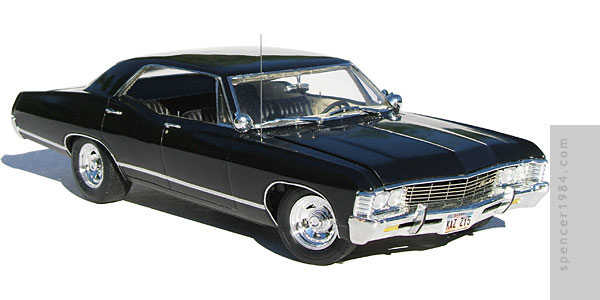 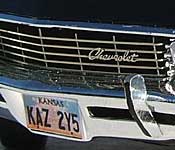 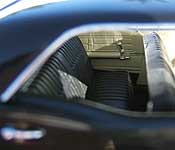 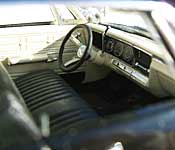 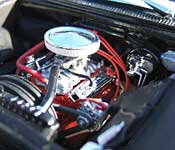 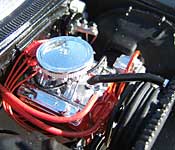 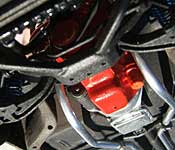 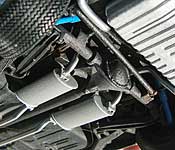 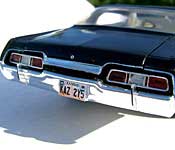 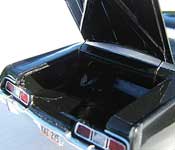 Whether you prefer "Metallicar," "Hunter," "The Civilian," or any of the other names it's picked up over the years, the Winchester's '67 Impala is one of the coolest TV cars ever. I wanted to make sure I did justice to it, and as a result this ended up being one of my longer builds (about 18 months from beginning to end). Part of the reason why it took so long was that there were no 4-door '67 Impalas available in scale. The closest available starting point was AMT's '67 Impala SS. As a 2-door, however, I was pretty much going to have to rebuild everything from the windshield back.

I started by cutting the roof about halfway back and removing the rear pillars. The area around the trunk lid was then flattened, converting it from a "fastback" deck to a "notchback" deck. I used the rear roof pillars from a '68 Camaro to get the basic shape of the roof roughed in, then started filling, sanding, shaping, and comparing the model to photos of the 1:1 car until it looked like a good match. I also removed the trunk lid at this stage in preparation of making it an opening panel. The original door seams were filled in, and new door seams were cut into the plastic by laying a photo of the 1:1 car on the model and tracing the lines with an X-Acto. The last big body modification was the hood: I converted the kit's hood to a non-SS part by sanding down the bulge and adding a center ridge. The result looked pretty good from the outside, but I had to add some filler to the underside of the bulge and I wasn't quite happy with the end result. So I ended up purchasing a new hood from Modelhaus. As usual, the quality was outstanding. I did a little bit of thinning at the edges to make is sit more flush with the fenders, but otherwise it was ready to go right from the box.

The interior needed nearly as many modifications as the body. I converted the 2-door panels to 4-door panels by grafting pieces from a second Impala kit to the rear seat area. the door pillars are sheet styrene, as is the rear dash and the headliner. The bench seats were taken from AMT's '70 Impala, with the head rests removed and the pattern modified slightly to better match the TV car. Finally, the steering column was scratch built, including a directional lever, column shift, and gear indicator. The ivory panels were painted using Rustoleum, and Bare Metal Foil was used for the chrome trim. Just for the fun of it, I also added a cassette tape to the radio.

Like most "Hollywood" cars, the Impala is actually represented by several different cars. When I had first started working on this, there was no canon engine. Since I knew at least one of the stunt cars had a 427, I used the original kit engine mated to an automatic transmission from AMT's '73 Caprice. Then the season 4 episode "In the Beginning" came out, and Dean referred to the engine as a 327. I already had the bulk of the car together at that point, so I had to decide whether the 427 was acceptable or if I wanted to risk the work I had completed to swap it out. I decided to take the chance, and replaced the big block with the engine and transmission from Revell's '64 Impala. I'm glad I did: not only is it now more accurate, the Revell engine generally looks nicer. I built it mostly according to directions, but added wiring, heater hoses, carburetor linkage, new radiator hoses, a breather cap, and updated the distributor with a cap from an MPC Firebird.

The chassis also got its fair share of custom work. I inverted the front spindles, added brake, fuel, and parking brake lines, replaced the front springs with custom metal parts, modified the exhausts to mate up with the 327 headers, and made a fully functional rear suspension. This last item includes a working 4-link rear end, telescoping shock absorbers, and real metal springs taken from a ballpoint pen. The completed chassis was carefully painted and weathered to reflect all the time Sam & Dean spend on the road.

With the bulk of the modifications done, all I had left was the trim to truly make the Impala. The grille was removed and replaced with a photoetched piece from The Model Car Garage, complete with the tiny "Chevrolet" script. MCG parts were also used for the door locks and trunk lock. Door handles came from two Revell '67 Corvette kits. The trunk trim was modified to remove the "SS" badge and was cut from the rear bumper and glued to the lid. Bumperettes were made from sheet styrene and covered with BMF. The window trim was also done with BMF, but the side trim and wheel arches were done using strips of metal tape. I used the side mirror from Revell's '67 Corvette, and the spotlights from AMT's Peterbilt Wrecker. Fujimi's Suzuki Jimny had a set of perfect sawblade wheels (right down to the hub caps!), but unfortunately it only has three of them per kit so I needed to get two Jimnys to get four wheels. These were put with generic parts box tires up front, and the big MTs from AMT's 1970 Baldwin Motion Camaro in the rear. The final touch was a set of first-season KAZ-2Y5 Kansas license plates.