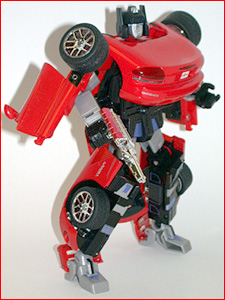 I saw this custom by Amon over at Remy's Transformers, and was impressed at how much more it made the figure look like his G1 self. By removing the plastic between the tabs under the back bumper, the rear fender/trunk piece can fold flat against Sideswipe's shoulders. It can still transformed as per the instructions (giving Sideswipe a set of shoulder weapons), or the head and legs can be rotated so that his "back" now looks like the folded-down Lamborghini nose from his original design (as seen above). The hands had to be swapped for this version, but since they're on ball joints it's relatively easy to pop them off and switch them. 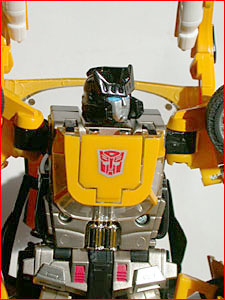 I didn't mind the new color scheme for Tracks (yellow instead of blue), but trying to use the original character's color model for the head was a mistake. I understand the reason to want to keep a G1 element like that, but a white head & red face on a yellow, gray, & black body? Besides, as vain as Tracks was, I'm sure he'd want a unified color scheme. A quick trip to the paint booth for a black head, silver face, & blue eyes took care of the problem nicely.

Overall, I like the Armada repaint of Airazor much more than the original TransMetal colors. The one thing that was still a bit troubling to me was the figure's face. With the big triangular eyes, flat features, and beaked mouth, she looked like a prop from an old "B" movie.

The replacement face came from a Star Wars Zam Wesell figure, which was cut to fit in Airazor's helmet after I removed the original face. The face was then repainted to accent the engine nacelles on either side of her head, and the blue field around the face was accented with black.

As a finishing touch, I gave Airazor a set of swords from a Metal Gear Solid figure.

I was happy to see the reissued G2 figures, not just because I really like the design of the figures, but also because I saw a great opportunity to do a retro-custom.

The custom was pretty straightforward: I took off Bludgeon's head & removed he "Megatron" face, leaving the helmet and mounting pin. I then took a new Masters of the Universe Skeletor head and cut it to fit Bludgeon's helmet. Very little reshaping was really required, and I was able to get a good fit pretty easily. I also modified the helmet by removing the extensions on either side of the jaw, so it didn't look like Bludgeon was wearing Megatron's helmet. Once the parts were prepared, the helmet was painted with PlastiKote red and the face was done in flat white with a mist of Testor's black window tint to bring out the details.

Technically, the "skull head" look only applied to G1 Bludgeon's Pretender shell, but I thought it was appropriate here for a number of reasons. First, since Bludgeon is a psychological warrior as much as a physical one, it makes sense for him to adopt his most fearsome visage possible. Also, he rarely left the Pretender shell, and when he did he almost immediately reverted to his tank mode, making the outer shell seem to be a more "true" identity. Finally, the colors and markings used on the RiD figure are more similar to Bludgeon's Pretender shell than his robot mode; even the overall proportions of the RiD version are more like the shell than the inner robot.

Like most old-school fans, I've been very happy with the Transformers: Classics line. Most of them have gone unmodified, but when I picked up Cliffjumper here I saw an opportunity for a quick custom to help improve the figure. The work was pretty straightforward: some careful carving with a good, sharp X-Acto gave CJ a set of horns more like his old G1 self, which also helps separate him a little further from his predecessor Bumblebee.

I had seen the preview images of the Armada Starscream, but it wasn't until after I got it that I figured out what was "wrong" with the figure - the rear Minicon attachment point prevents Starscream's jet mode from having a tail rudder! But fortunately because of the same Minicon attachment, there was a ready-made place to install a tail section.

The overall shape of the jet lent itself to a modern "V" tail design quite well, and I found the perfect parts in a 1/72 F-14 kit. Instead of using the F-14's rudders (I needed them for another project), I trimmed the wings down to about half their length, then mounted them on a pylon made from plastic tube and sheet styrene. Once set, I painted the new tail section to match the toy's parts using a combination of PlastiKote and Testor's paints.

The finished accessory has a Minicon-sized hole in the underside, so it can be snapped on and off easily and doesn't get in the way of transformation. It can also be mounted on Starscream's arm in robot mode for an additional blade weapon.

Over the months between the releases of Starscream and Thundercracker, I had gotten used to seeing the jet with my custom V-tail in place. So when I got Thundercracker home & unpackaged, I discovered that the "incomplete" look of Starscream now looked completely wrong on Thundercracker. Obviously, I was going to have to remedy this.

Since Starscream & Thundercracker used the exact same molds, I wanted the tail piece to be identical as well. The good news was that I had my first tail to use as a template. The bad news was that the kit I used to make the rudders is long out of production, so finding another donor kit wasn't as easy as a trip to the hobby store. Fortunately, I found what I needed on eBay, and Thundercracker now has an identical piece to match 'Screamer.

Now, I just need to decide what to do about Skywarp...

Not so much a custom as an accessory to address something that has been nagging me for a while. Hasbro decided to reissue the original G1 minibots as keychains, which meant that there was now a large loop on the rear bumper of the car with a chain through it. Since the loop is part of the mold, you either had to live with it or modify the figure.

I was originally going to just cut off the loop and repaint the bumper, but then I had a better idea. Tap-Out is supposed to be a bodyguard, so why not give him a little extra firepower to do his job? The gun is a modified unit from a T-800 figure with a rod that fits into the keychain loop on the back of the car. I did not modify the gun to be usable in robot mode, but according to his profile it's only his car mode that could use some extra muscle.

When I first got this, it was missing everything above the main body. What was there was in excellent condition however, with very little chrome wear and almost no chips or scratches.

Since everything that was missing was either painted or plated, I was able to use a regular G1 Sunstreaker (with almost no chrome left) as a parts donor. After disassembly of the G1 car I stripped and polished all of the chrome and painted elements, then restored it to "original" condition. The chrome parts were done with Bare Metal Foil and some paint touch up, and the red section was painted using Testors and Pactra paints. Because I had removed all of the original yellow paint, I was able to "mist" parts of the canopy to simulate the original factory finish.

I used a set of Sunstreaker stickers from Reprolabels.com to finish the new section, then carefully removed and reapplied the original Diakron stickers on the lower half of the body to get them a bit straighter. The toy was then reassembled using all it's original parts, and now makes a nice companion to my G1 Lamborghinis.