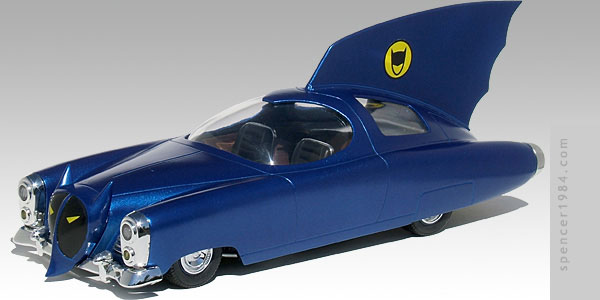 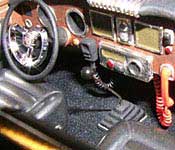 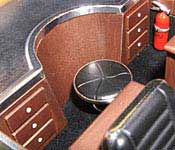 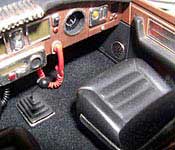 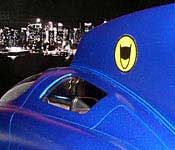 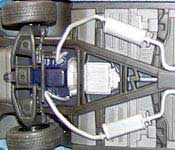 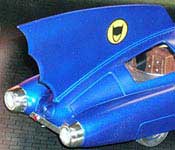 Cool Fact
This was the first Batmobile ever to use a painted-on bat logo.

The 1950 Batmobile remained the "standard" for over a decade, but that didn't mean that variations didn't show up. In October 1952, Dick Sprang drew this modified version of the '50, and I decided to make it my second buildup of Polar Lights' kit.

I wanted to make the interior a bit more upscale than the utilitarian 1950 car, so I went with a two-tone woodgrain & black. The wood was done by spraying a base layer of brown, then drawing the grain in place with colored pencils. To make the stainless steel work table, I filled & sanded the bench smooth, added a lip made from .010" stock, then covered the whole thing in metal tape. Other interior details include a carpeted floor, custom gauge faces, a scratchbuilt telephone, a '53 Corvette steering wheel, custom coiled wires, and Bare Metal Foil trim.

Outside, I made a new fin from .080" stock, and made a "base" for it from angle stock. To mimic the low-cut front fenders, I added fill panels made from .020" stock, and filled in the edges. Finally, the roof-mounted spotlight was removed and the mount hole was filled in. Once modifications were done, the body was painted Model Master GTS Blue, and finished with Bare Metal Foil and a set of parts box hubcaps.