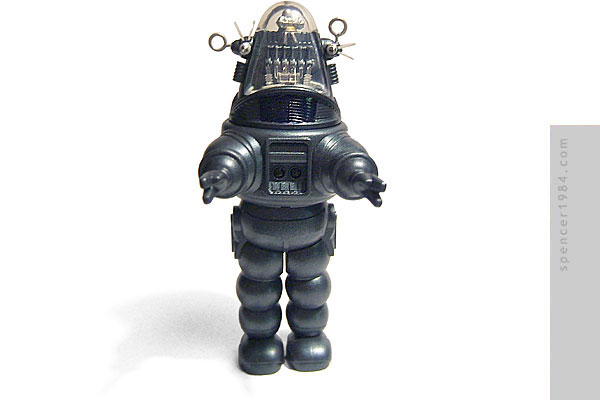 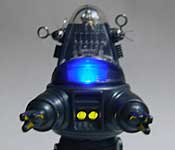 Robby may be one of the most famous robots in the history of science fiction, but scale models of him are pretty scarce. 1/24 scale replicas are even more difficult to find, with the current count somewhere in the neighborhood of "zero." While this Robby ornament is still a hair too big, he's not far off (Robby is pretty tall to begin with, officially standing at 7'6"/2.286m). All he really needed were a few upgrades.

The first thing that had to go was the loop in the top of his head, where the ornament hook would normally go. I also replaced the antenna on either side of his head with bent wire pieces, and added a swivel waist. Finally, I shaved a little material from the bottoms of his feet, since they looked a bit tall compared to photos of the 1:1 Robby. This also helped bring his height down closer to the other figures in my collection. He's still about 4" - 6" (10 - 15cm) too tall, but until a true 1/24 scale Robby becomes available I'm quite happy with this one in my collection.