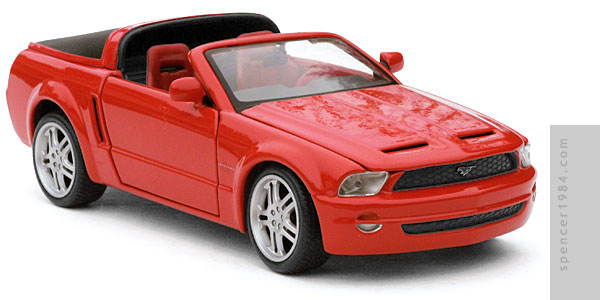 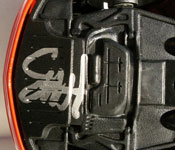 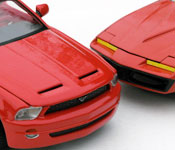 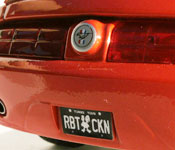 The season 3 episode of Robot Chicken "Rabbits on a Roller Coaster" featured (among other parodies) a PSA demonstrating why you shouldn't drink & drive - especially if you turn into a car. Brett Matthews had been updated to a Mustang GT concept car for the bit, and I thought it would be a fun companion piece to go with my classic Turbo Teen Firebird.

I started with a Maisto diecast that was already painted the appropriate red, so my work went into updating it to its TV appearance. The biggest change was the addition of the rear louvers (likely included as an homage to the classic Firebird accessory). These were made by cutting a sheet of model railroad siding and bending it to fit the rear deck and roll bar. This was epoxied into place, and then the framing was made using strip styrene.

Some interior and engine details were added, I made a custom rear license plate, and then it was packed up to go to NYCC with me, where I was able to get it autographed by Robot Chicken creators Seth Green and Matt Senreich.