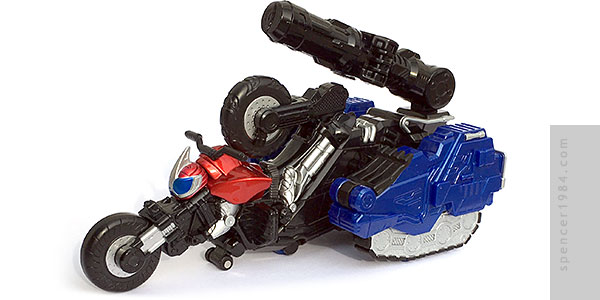 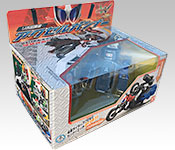 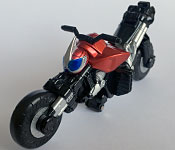 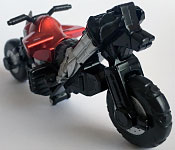 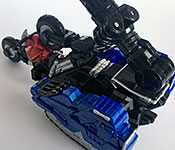 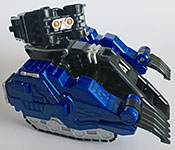 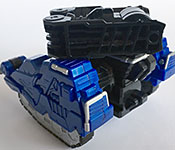 Kamen Rider W was the 11th series in the Heisei-era Kamen Rider series, 20th in the overall franchise. In it, Ryu Terui is a police investigator and Kamen Rider Accel, seeking vengeance for the death of his family and clashing with the established Kamen Rider Double. he eventually has change of heart, becoming a true hero and joining Kamen Rider Double in their fight against the Dopants. Among the tools Kamen Rider Accel uses is the Gunner, a robotic tank that serves as a support droid. It can also combine with Kamen Rider Accel's bike form to become the AccelGunner, a powerful vehicle armed with a Gaia Cannon and Gatling Wheel.

The box is a mid-size seven panel affair, measuring 8¾" (22cm) x 6" (15cm) x 4" (10.5cm), with the back ad panel extending up an extra 2¼" (5.5cm). It's extremely colorful, with product photos, co-sells, and program art intermixed almost randomly across every surface. The window to view the actual vehicles is relatively small, only 2½" (6.5cm) at the widest point and 6¾" (17cm) with truncated corners to allow for bigger pics of the vehicles combined mode and co-sell. The Bandai logo is on the front panel under the window and photo, while the program title is across the top billboard. The inside of the box is lined with a bright yellow sheet of cardboard. Within that isa doubled clear plastic tray that acts as a clamshell to hold the bike and Gunner A in their respective positions. A 4-page illustrated instruction sheet and bright yellow safety warning sheet (don't stick your fingers between closing panels) are tucked in a plastic bag under the yellow liner.

Both components are made from tough ABS plastic, chunky enough to withstand play but still nicely detailed overall. Casting is sharp and error-free, and the dark color and sci-fi nature of the vehicle work with the quality craftsmanship to reduce its "toylike" appearance. In addition to the more obvious head and shoulders, Bike Form has vestigial arms and legs cast into the sides of the chassis and picked out with silver. The front suspension, brake discs, and mask are also painted silver, while the belt is painted dark gunmetal. The red sections are transparent red over silver, giving it a nice candy color effect. Paint is generally smooth and even, though there is some ghosting where the silver meets the black.

Gunner A is a little more complex than Bike Form, but still has the same general aesthetic and quality sculpt and paint. Its central frame is the same black ABS, with silver detailing for the pipes and stylized "A" on the front panel above the connection socket. The treads, claws, and cannon are more of the same, with silver used for the outside panels of the treads and the face centered at the front of the stowed gun. Its eyes are painted transparent orange, giving them a similar candy color effect as the red on Bike Form. The outriggers and six wheels on the underside of the tank are cast in blue ABS, with just a few small details picked out in silver. Lots of tech detailing is cast into the plastic, including track links, hydraulic lines, and myriad vents and outlets.

Bike Form has a flip-down kickstand that locks into both the fully down and fully up positions. It does a good job of keeping the bike upright considering how small it is, and has free spinning wheels so you can roll the entire bike along the ground without scuffing anything. The rear wheel folds up over its own fender for combined mode, resting nearly on the seat.

Gunner A has flip-up claws, retractable treads, and the droid's head can be reconfigured into the Gaia Cannon by folding the sides of the head around. The head/cannon can rotate 360° and elevates 180°. Both of these are stiff ratchet joints, so it holds any position well.

To combine the two into Accel Gunner, you need to flip up the rear wheel and claws, then slot the rear of the engine into the socket on the front of the tank. The foot pegs on the bike are spring loaded, acting as buttons to retract the tabs that lock it into Gunner A.

A lot of liberties had to be taken when turning a motorcycle into a toy that won't disintegrate upon opening the package, so really this is only accurate in the broadest strokes. It's recognizable, but mostly as a caricature rather than an exact replica.

Sometimes "close enough" works, sometimes it doesn't. Although this really missed in terms of literal accuracy, I think Bandai caught the spirit of the vehicles here and it ends up a winner. The casting is simple but competent, the paint is generally excellent, and the interaction feature works nicely.