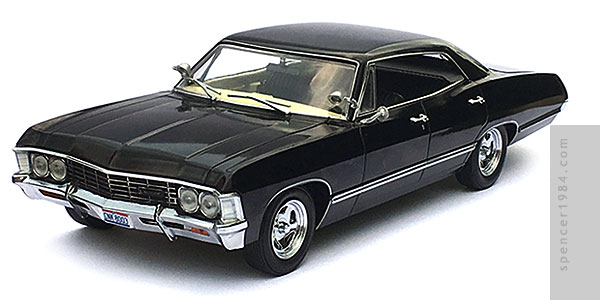 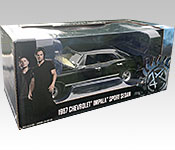 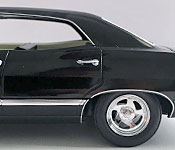 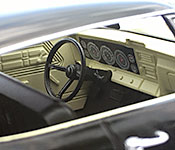 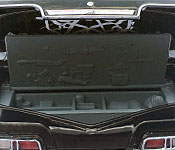 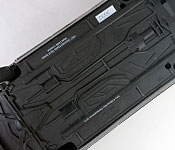 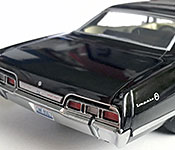 On April 21, 1967, the 100 millionth GM vehicle rolled off the line at the plant in Janesville: a blue two-door Caprice. There was a big ceremony, speeches, the lieutenant governor even showed up. Three days later, another car rolled off that same line. No one gave two craps about her. But they should've. Because this 1967 Chevrolet Impala would turn out to be the most important car—no, the most important object—in pretty much the whole universe. She was first owned by Sal Moriarty, an alcoholic with two ex-wives and three blocked arteries. On weekends, he'd drive around giving Bibles to the poor. "Gettin' folks right for Judgment Day," that's what he said. Sam and Dean don't know any of this...but if they did, I bet they'd smile. After Sal died, she ended up at Rainbow Motors, a used car lot in Lawrence, where a young marine bought her on impulse. That is, after a little advice from a friend. I guess that's where this story begins.

As with others in this series, the Impala comes in a simple window box with a unique cutout for the window and a dark and stormy color scheme befitting the show. The front panel has "1967 Chevrolet Impala Sport Sedan" printed under the window, with the Winchester brothers to the left and a protection symbol to the right. A tiny "Adult Collectible/Contains:1 Die-Cast Car" is printed in the extreme lower left. The top panel has a large "Supernatural/Join the Hunt" centered over the window, and is flanked by the GreenLight logo and a block of text saying "Adult Collectible/Limited Edition/1:24." Everything except the "Contains..." text is rearranged and repeated on both end flaps. and the back. The bottom panel is plain black with the required legal and contact information. The interior tray continues the spooky exterior design, and the car is held in place with a folded plastic tray.

For the most part the casting and paint are good, though neither quite reaches GreenLight at their best.Panels are straight, breaks are nice and even, and the fit of the trunk is outstanding. But there's still a faint seam on both C pillars, some casting marks on the door handles, mirror, and spotlights, and I'm pretty sure the wipers are on backwards: the left wiper has a pronounced curve so that only the tips of the blade touch the glass, while the right wiper is nearly flat and only the middle of the blade touches the glass. It seems like if these were swapped they'd fit a lot better.

The paint is mostly smooth and even, though there are a couple of small marks in the roof and doors. What really dragged the score down here, though, is that the whole car was coated with a greasy film that had to be polished off. I've encountered this before, but never from GreenLight. The trim is pretty good, though, with sharp edges and good placement. the front left wheel arch is the one exception, where the leading edge kind of wanders off course a little. Also, the black wash used for the grille doesn't line up all that well, with some rough edges and the "Chevrolet" emblem nearly obliterated. A single "Impala" fender script is located on the right rear fender.

The interior is a simple but nice two-tone, with excellent detailing on the door panels and adequate detailing on the dashboard (I do wish GreenLight would stop doing the "sticker as a gauge cluster" thing on older cars, though). Aside from the sticker, a spot of black is used for both vent outlets. Unlike recent releases, the seats here are a more solid plastic that matches the rest of the casting. There's a bad spot near the back left corner, where the glass panel has been riveted to the roof: a couple of metal tendrils hang down from the headliner. The trunk more than makes up for this flaw, however, with nice detailing on the underside of the lid (including the correct sigils) and sill. The gray weapons crate is placed in the center of the trunk, and has a hinged lid to show off the various guns, knives, and other tools of the trade.

GreenLight continues to make their chassis flatter and simpler, with this only achieving a passing resemblance to a B platform. The wheels are chrome plated plastic with vinyl tires.

The trunk and its weapons cache both open, and will hold their open positions.

The broad strokes are all here, and for the most part the Impala looks pretty good. But the longer I look, the more that weird inaccuracies and curiosities start popping out at me. Things like the simplified sawblade wheels with their oversized holes and matching front and rear tires (rather than the big n' littles it should have), or the lone stock Impala script, or the undersized license plates (GreenLight opted for the S2+ "CNK 80Q3" Ohio plates), or the too-flat grille, or the weird wipers. I also have a feeling that an SS replica may have been somewhere in this diecast's development history: the way the roof slopes, especially the drip rail over the rear doors, looks much closer to the lines of the fastback coupé than the Sport Sedan. Scaling looks good, though, with this coming it at a near-perfect 1/24.

Maybe it's because I spent a lot of time with this car, or maybe I was expecting more from the unfinished prototype, but I was really hoping for something better from GreenLight. It's not even that this is a bad replica, it's just that so many small details were done incorrectly that it brings the overall piece down. Like the Gremlins VW, I think this will serve best as the starting point for a better custom.