My concept of these characters is that they were reinforcement troops from Cybertron who inadvertantly received television transmissions when they were reviewing Earth for suitable disguises. 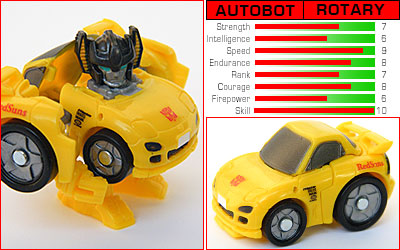 FUNCTION: WARRIOR
"The key to success isn't power, it's balance"
Former leader of one of Iacon's less reputable street gangs, Rotary was recruited by the Autobots after Naas witnessed his skills while undercover. Still a bit of a hot head, but usually keeps his temper in check long enough to humiliate his opponents: his favorite game is to lead a Decepticon into a hairpin turn at full speed and laugh when the inevitable crash occurs behind him. Not quite as agile in robot mode, but stronger than he appears and readily uses any and all methods to win.

Much like Grindor as Grave Digger, I have to think that someone at Takara had Initial D and Keisuke Takahashi's FD3S in mind when they made QT Sunstreaker: the color, the wing, even the wheels were correct. The only thing I needed to add were the "Red Suns" graphics on the rear fenders and the sponsor logos on the doors. His personality and background is a (very) loose version of Keisuke's. 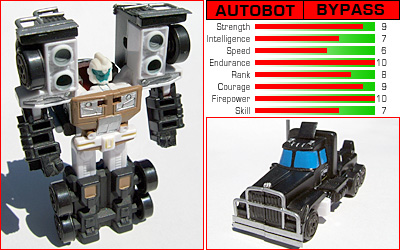 FUNCTION: TRANSPORT
"Stay smooth but always keep moving"
Has no interest in leadership, but his natural abilities often place him in the role regardless. Acts as the team's inspiration and moral compass. Prefers actions to words: avoids motivational speeches, but has been known to smash headfirst through the walls of Decepticon detention facilities to free captured teammates. Shoulder-mounted launchers fire surface-to-air missiles, or can be jettisoned and detonated as a single unit with an explosive force equal to 12,000 tons of TNT.

Bypass is based on Rubber Duck's Mack from the movie Convoy. I used the Spychanger Optimus/Scourge mold as a starting point, and added the grill guard, sleeper, deflector, exhaust pipe, "RD Trucking" door stickers, and hood ornament (carved from a white metal part originally intended for a Batmobile model). I also removed one of the two air cleaners, reshaped the windshield, and switched the head with another Spychanger head I had in the parts box. 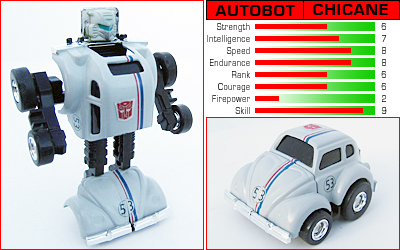 FUNCTION: COURIER
"Slow and steady wins nothing"
Often told to "act his age" by other Autobots. Outgoing and friendly, but somewhat immature. Always eager to show off his skills on the road; his powerful engine and small size give him nearly unmatched maneuverability in car mode. Top speed of over 250mph on smooth roads, but can also traverse surprisingly rough terrain. Has no offensive weaponry, but a number of diversionary tools such as smoke and oil slick emitters, caltrops, and electronic jammers.

Chicane was my first custom Transformer custom based on a TV or movie vehicle. It started as a Bumblebee keychain, and was repainted Krylon light gray with custom made decals to look like the famous VW Beetle from the "Herbie" movies. I removed the keychain hook from the back bumper, and chrome plated both bumpers with Bare Metal Foil. 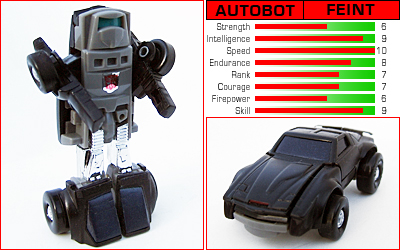 FUNCTION: SHARPSHOOTER
"Strike only from where the enemy can't return the favor"
Feint is precise in everything he does - whether it's taking down a Decepticon or performing a system check. Fastidious by nature, he will drive through car washes several times a day if the course of duty has raised too much dust. Uses his sharpshooting skills to provide cover fire for his fellow Autobots. Has tremendous speed in car mode - can nearly achieve Mach 1. This, along with sophisticated stealth technology, allow him to move around the perimeter of a battle, making Decepticons believe they are surrounded. Fiercely loyal, he will abandon all self-preservation if one of his teammates is threatened.

The second Mediabot to join the ranks is based on KITT from the TV series Knight Rider. Feint started as a Windcharger keychain. I removed the loop from the front of the car, notched out the nose to make KITT's scanner, filled in the rear window louvers, and added a rear spoiler made from styrene stock. To prevent paint wear, the arms are dyed black instead painted. I'm still getting the hang of this technique, which is why only the arms are dyed and not the rest of the body. While it was apart, I noticed that if Windcharger's chrome nose piece was installed upside-down, it looked a lot like KITT's custom nose piece. So, when he went back together, the nose was intentionally left that way. 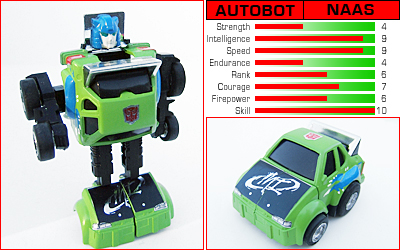 FUNCTION: RECONNAISANCE
"Data doesn't lie"
Often considered one of the best intelligence agents on Cybertron. Generally charming and affable, but is easily irritated if anyone questions the source or reliability of his information. High-output engine can propel him to nearly 400mph for short distances, but is prone to failure without sufficient cool-down time after these bursts of speed. Car mode is virtually useless over rough terrain. Carries concealed laser pistol and incendiary grenades in robot mode.

Naas is based on the Mitsubishi Eclipse from the movie The Fast & the Furious (the name comes from the pronunciation of "NoS" as used in the movie). It started as a G1 Cliffjumer, repainted Sublime Green with hand-painted door graphics and a Bare Metal Foil rear spoiler. The hood is a custom label from Reprolabels, made to match the movie prototype with Eclipse-style headlights to mask Cliffjumper's Porsche-style nose. 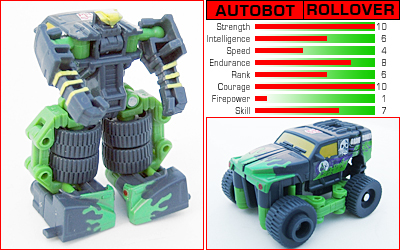 FUNCTION: WARRIOR
"If it ain't broke, break it!"
Enthusiastic and fearless to a fault. Will charge into battle at full speed without any thought of strategy or self-preservation, with predictable results. Would've been consigned to the scrap heap centuries ago if not for dense armor plating and an incredibly rugged chassis. Takes all of his injuries in stride, patching himself back together in the field as needed until more proper repairs can be made. Teammates would find his behavior irritating if not for his upbeat attitude and helpful nature. Lacks speed in truck mode, but can traverse nearly any terrain including small bodies of water.

Rollover gets his name from Grave Digger driver Dennis Anderson's tendency toward destructive runs at events, while his "patch-and-go" mentality is a nod to the multiple variations of the truck that have run over the years. The base figure is Grindor from the Transformers: Classics Dirt Digger Mini-Con team. The designers of Hasbro were clearly aiming at a Grave Digger homage with this one, and I was happy to add the appropriate stickers from Reprolabels to bring him the rest of the way.