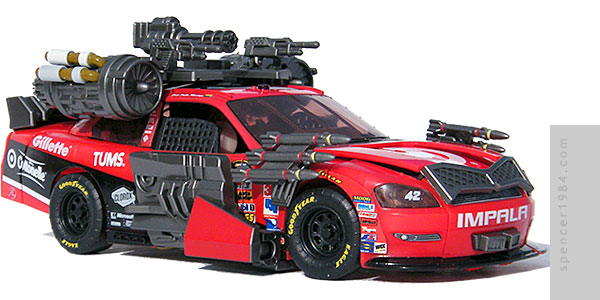 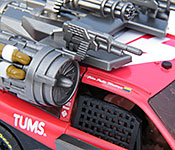 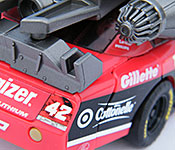 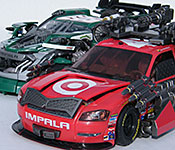 Cool Fact
Despite Leadfoot's original appearance in the Human Alliance series, none of the Wreckers appeared as unmodified NASCAR racers in Transformers: Dark of the Moon.

For whatever reason, Leadfoot really got the short end of the stick in the Human Alliance series. Topspin didn't have a HA figure at all, but I wouldn't argue with anyone that claimed that having no release was better than having a lame release. Not that the NASCAR body was poorly done, it just wasn't nearly as cool as Roadbuster and his "weaponized" look. So I did what I could, with some paint touch-ups to the roof camera and cowl, and an improved deco thanks to Reprolabels' upgrade set. The thought of scratchbuilding parts to turn him into a true Wrecker crossed my mind more than once, but it was never a project I felt strongly enough to move on and Leadfoot was put up with the rest of my finished Human Alliance figures.

Fast forward to February 2016, and the release of "Alien Attack APX-I." There had been some rumblings about it before then, but not official announcement of its release and it was only through luck that I happened across them being sold on eBay.

The set is sold as an add-on to the standard Hasbro figure, but as with many 3rd party sets they were very careful to avoid any copyright infringement (though I do appreciate the character's designation of Pb82 - Pb being the symbol and 82 being the atomic number for lead). The box is a simple but nice looking piece, with a velcro latch holding the hinged front cover closed and a pair of plastic trays displaying the parts behind a clear window under said cover. The parts consist of a rear spoiler, gun/engine roof unit, two side panels, two missile pods, and upper and lower grille pieces. It already has enough paint apps to be interesting, so I just followed the instructions for getting them in place. The only problem I had was replacing the rear spoiler, which required unscrewing the tail panel. Hasbro used a plastic for this panel that has a consistency somewhere between cheese and pudding, though, which made removing the screws troublesome and tightening them down impossible. I got as close as I could, and was relieved to see that everything else simply snapped into place. One other small modification was needed because I had used the Reprolabels set. The missile pods plug into the small rectangular holes over the front wheel openings, but these were covered by the stickers. Three small cuts with an X-Acto had them clear.

This was definitely a worthwhile set: it looks great, fits nicely, and provides a much-needed upgrade. The interior art on APX-I has an action shot of Leadfoot and Topspin, so here's hoping it's a preview of an upcoming project - it would be great to finally have all the Wreckers together!