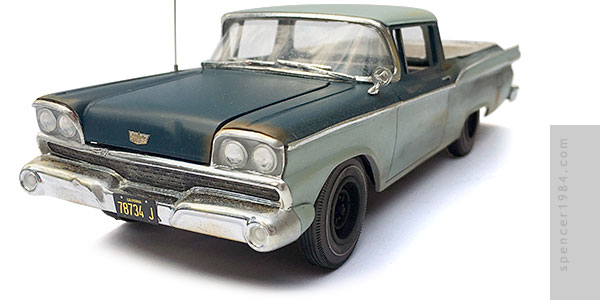 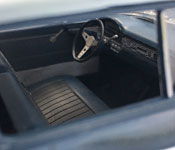 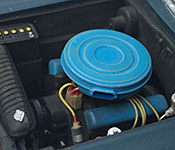 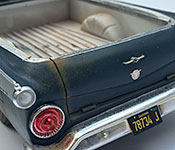 This started out as the 1988 "Skip's Fiesta" reissue of Revell's old Skyliner kit. It was partially assembled and incomplete when I got it, but what was there seemed like it might make for a good custom project. Exactly what that custom project would be didn't materialize until several years later, when I found myself looking for a project to build for the 2018 NNL East theme build "59th Anniversary of 1959." Since the Galaxie and Ranchero shared so many parts, it seemed like a good starting point to turn into Harry Dean Stanton's ride from Paris, Texas.

The engine and chassis were built mostly box stock, with the addition of some basic wiring and an open air cleaner inlet. I also used a parts box master cylinder, but that was only because the original was among the parts that were missing when I got the kit. One of the wheel assemblies was also missing, but since the movie car had neither hubcaps nor wide whitewalls I wouldn't have been able to use the stock parts anyway. Instead, I got a set of plain steel wheels from B-N-L Resins and mounted them with parts box inner wheels and tires.

Because the kit represented a top-of-the-line Galaxie, the interior trim was wrong. I modified the seats by first sanding them smooth, then cutting out panels to be replaced by styrene V-groove for the correct pleated inserts. The door panels were completely scratch built and fitted with hardware from The Model Car Garage. I also added some ribbed rubber floor mats made from styrene siding, and added a screen-accurate aftermarket steering wheel with a scratchbuilt rim.

No surprise, the body required the most work (in part because this was tooled up during Revell's multi-piece body era). I decided the best way to get started was to graft the roof of Jimmy Flintstone's '57 Ranchero onto the '59 Galaxie body. It's not a flawless fit—the windshield should ideally have a slightly different top edge—but it looked *very* close. The box wasn't quite as easy thanks to Ford's increased length in 1959, but I was able to chop up the Ranchero's trim to give me the outline of the box. These parts were glued to the Galaxie's deck lid, and the missing sections were made by taking foil copies of the trim and filling them with epoxy for strength. Once the box was outlined, I cut out the center of it with a Dremel tool and blended the outside into the body with Tamiya 2-part and glazing putties. The box itself was scratch built from sheet styrene.

Now that I had a Ranchero, it was time to make it look like the movie truck. As with the interior, the high-end trim had to go so I sanded off the side spears and blended the rear spats into the fenders. I made the dents by heating the plastic over a candle and deforming it using hobby knives, the edge of my work bench, and anything else that looked like it would give me the proper shape.

Once the modifications were done, I painted it Tamiya AS-5 Light Blue and AS-8 Navy Blue as sun-faded approximations of Wedgewood Blue and Surf Blue. The inside of the box was left as white primer. I then gave everything a patina using Tamiya weathering kits, paints, pastels, and chalk.

Trim was a combination of paint, Molotow Liquid Chrome, BMF, metal repair tape, and household aluminum foil. I used a wider variety of materials than usual because I needed to use the trim to smooth over a couple of the rough spots left by my shorter-than-usual build schedule, and the results turned out not too bad. The grille, bumpers, and lights were all based on kit-supplied parts. I used the same method to deform the grille and bumper as I used on the body. Finally, the Ranchero scripts and badges came from a Model Car Garage set, the rear latch was scratch built, the license plates were custom prints, and the wipers and mirror were taken from my parts box.