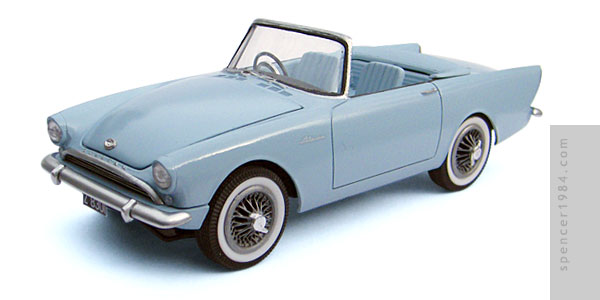 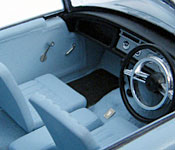 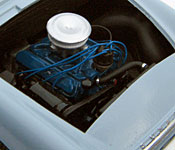 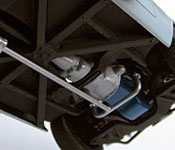 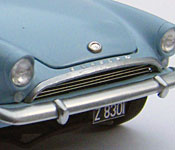 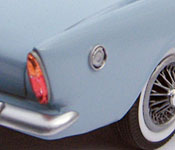 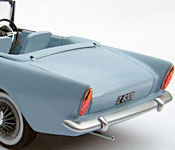 Cool Fact
Though the Sunbeam Alpine is considered the first "Bond Car," it was not the first car Bond drove on-screen. That honor belongs to the 1957 Chevrolet Bel Air Convertible he commandeered from a would-be assassin shortly after Bond's arrival in Jamaica.

I considered going with a '57 Chevy to represent Dr. No...M2 even has a black version of their diecast car, which would have saved me a lot of work. But in the end, the Sunbeam was just too much a part of the 007 universe for me to skip. The closest starting point was AMT's Sunbeam Tiger, which had been released under the Get Smart license.

Externally, the biggest difference between the Series II (Dr. No) and Series IV (Get Smart) Sunbeams was the rear end. The later cars had shorter fins, a flatter trunk lid, and a shorter bumper shelf. To backdate this model, I made fin extensions from styrene stock, extended the trunk lid with Tamiya 2-part putty, and moved the rear splash pan outward. I also removed all of the "Tiger" trim and scripts, and cut off the vent windows. The body was then painted Plastikote blue and trimmed with paint and custom decals. The kit-supplied wheels and tires were swapped for a set of wire spokes from a Monogram Jaguar, parts box knockoffs, and whitewalls from a diecast car. The grille frame was from the kit, but the single large bar was removed and replaced with four thinner bars made from wire. I then scratch built the fuel fill, moved the former grille emblem up onto the hood, and added a set of screen-accurate license plates.

There were a few more details that needed to be corrected inside. First, the dashboard needed to be converted to right hand drive. For this, I sliced off the dash face, sanded the back side smooth, flipped it over, and made a new trim ridge from half-round stock. There was no easy fix for the seats, which had to be entirely scratchbuilt to get the correct Series II look. The engraving on the door panels was pretty light, so I made new door handles and used a set of photoetched window cranks. The tub was painted body-matching blue and sprayed with Dullcote, and the details were picked out in silver and black.

The engine was tricky: the actual movie car had the typical Alpine's 4-cylinder, while the kit had the Tiger's V8. There were no suitable donors for the smaller engine, and I did not want to scratchbuild one. I decided the best course was to use the V8 and claim that MI6 gave Bond a sleeper in case he needed a little more horsepower. Yes, this car was supposed to be a rental, but that's just a cover story.

The engine was built to look like a slightly earlier version of the Windsor engine, with basic detailing and simple air filter taken from a Hot Wheels "Teed Off" diecast. This was then exhausted through a scratch built system that mimicked the Alpine's single pipe. The chassis was nearly box stock, though the suspension height was changed to correct the "nose up" stance common to these kits and a set of metal springs replaced the original plastic parts in the front end.