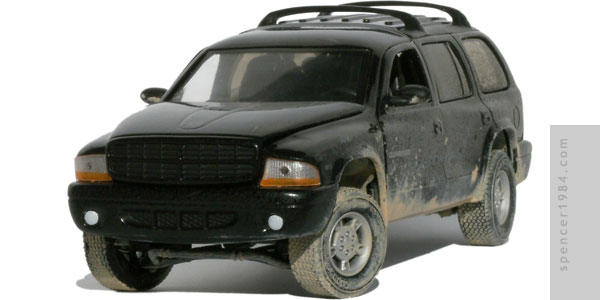 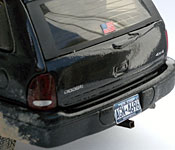 Cool Fact
The Maize was not originally planned as a sequel to Dark Harvest - it was a stand alone picture created by Bill Cowell, but sometime between creation and distribution it received the "Dark Harvest" preface.

Amusingly enough, Anson did as good a job with this diecast as as Cowell did on the movie. The hood and roof looked like they had been painted during a sand storm, the tires belonged on a roller skate, and the first time I tried to open the rear hatch it broke off in my hand (followed immediately by the left taillight falling off). It was as if the fates had gathered 'round and cursed anything related to this movie. But, I've faced far more argumentative builds, so I was undaunted by a little polish & paste work.

Work was actually pretty simple: I didn't even worry about disassembling it. I just cleaned up the outside of the vehicle and did some wet sanding to get rid of the sandblast effect on the hood & roof. Since it's one on-screen appearance featured some pretty heavy mud (courtesy of a late autumn NY driveway), I recreated the effect with a mixture of paint and baking soda. I also replaced the tiny tires with a set from my parts box, added the trailer hitch bracket and window sticker, and made a screen-accurate license plate.