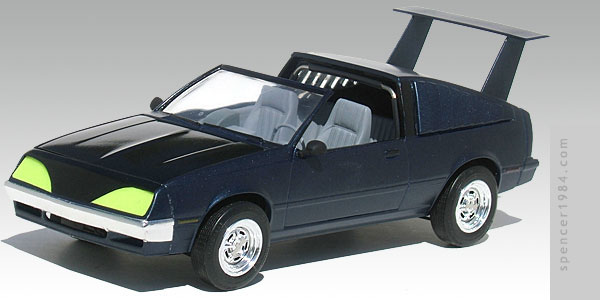 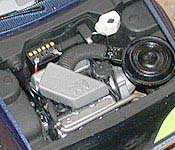 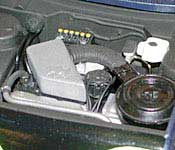 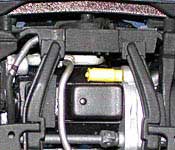 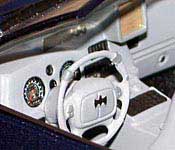 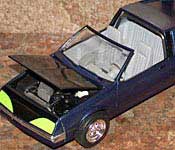 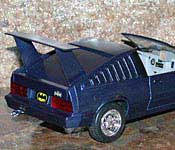 This unlikely Batmobile appeared in Detective Comics #597, used when Batman was following a tracking device he planted on a suspect. As soon as I saw the "economy" Batmobile, I knew I had to build it sooner than later.

Some people have said that the car should be considered a modified Mustang, but the rear hatchback was drawn much more like the early-'80s J-body cars from GM (including the J-2000/Sunbird and Cavalier), without the Ford's trademark "bustle." As such, I started with MPC's Cavalier and began making the necessary modifications. I removed the roof between the windshield and B pillars, and modified the door frames to have frameless windows. The nose of the car changed a bit from panel to panel, but I reworked the Cavalier grill & headlights to match as closely as possible. Finally, I added the kit-supplied rear window louvers and a scratchbuilt rear spoiler.

The interior was modified to macth the drawings as much as possible. To go away from the "Cavalier" look, I cut off the shroud around the gauges and added the center console from a C5 Corvette over the stock heater controls. The main center console was beefed up with square stock, and various tech gadgets were added to it and the top of the dashboard. The bigger center console meant that I had to move the seats closer to the door panels, which required me to modify the steering column so that the wheel would stay centered over the seat. Round stock provided the new column, and a highly modified Pontiac Grand Prix steering wheel completed the look. The interior was painted with PlastiKote gray primer and flocked with black carpeting.

The chassis was never shown, so I had a chance to go all out here. The stock Cavalier transaxle was used, but that's the only component I used from the kit. The stock 4-cylinder was replaced with a Corvette 350, complete with scratchbuilt intake, cooling setup, exhaust system, and a host of other details. Despite the limited space, I made sure everything was in place to replicate a fully functional engine (including a now-hidden belt assembly under a shroud next to the front right wheel). To add a fun little touch, I added a photoetched bat emblem to the intake box.

The main body and the rear window were painted Duplicolor blue, with Krylon black for the hood & nose. To make the translucent headlight covers, I layered a tinted Post-It over clear plastic and cut them to shape. Parts box mirrors, wheels, & tires, Bare Metal Foil, and some spare photoetched bat emblems finished the look.