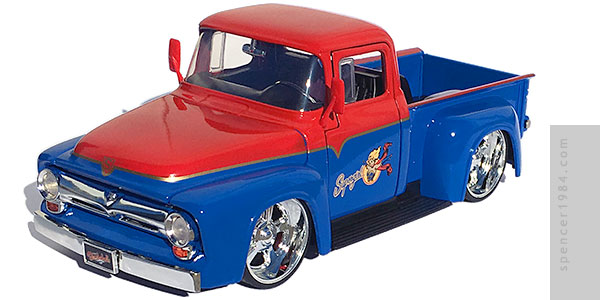 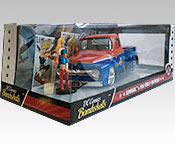 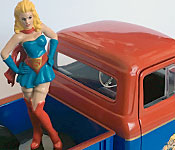 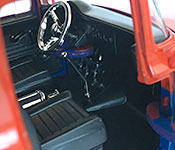 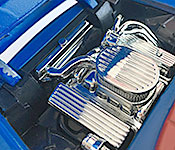 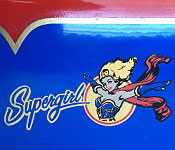 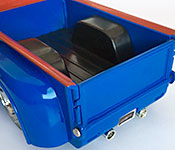 This is nearly identical to the box that was used for Poison Ivy, with the only changes being "★ ★ Supergirl & 1956 Ford F-100 Pickup ★ ★" is now written under the window on the front panel and the internal die cut piece behind the truck now has pictures and script for Supergirl. The truck is held in place with two screws with plastic bands around the hood and doors keep them closed and the rear of the bed is in a tray to keep the tailgate closed. Supergirl is screwed to the base near the front of the car.

Casting-wise, this is still solid work. The main body (cab and bed cast as one piece), hood, doors, and tailgate are all diecast. The front bumper and grille are chrome plastic, the bed liner and running boards are black plastic, the headlights and glass are clear plastic, and the mirrors are soft vinyl with chrome stickers for glass. The contours are generally good, although the gaps are a bit wider here than on the other Bombshell vehicles. This is especially noticeable where the hood meets the cowl, and the blue firewall visible between the two red panels exaggerates the gap...and brings us to this car's biggest weak point: paint. The base red is OK, though the hood had quite a few swirls that needed to be polished off and there were some rough spots on the right side over the front fender. The blue is about the same, with some dust in the right rear fender but otherwise passable. Open the doors or hood, though, and things look pretty bad. The door jambs are a mess of blue and red poorly covering each other, and the left hood hinge has shed its paint leaving tiny blue flecks and a gritty feel to the hinge operation. The trim is even worse, with visible edges where red paint meets red print, and a very rough surface under the gold stripe. Also, Jada didn't bother to paint the taillights, leaving them blue indents under the tailgate. With all of these, plus a misaligned mirror glass and substantial chipping on the top and right edge of the bumper, there appears to be a lack of care with this truck that hasn't shown up on any of the other cars in the series. The doors look good at least, with a nose art style portrait of Supergirl and her name centered in the blue field.

Under the hood is a massive solid chrome V8 with a separate oblong air cleaner and A/C unit. The casting is well done and looks good against the black engine bay. The interior is satin black with bright chrome used for the steering wheel, shift lever, pedals, nitrous bottle, and rear view mirror. Underneath is an old-school Jada chassis with only basic detailing and a pair of chrome exhaust tips. The wheels are bright chrome with rubber bands over four wheel disc brakes with red calipers.

The hood, doors, and tailgate open. The doors work fine, and the hood is good aside from the aforementioned grit. The tailgate has no stops, so once it is untabbed it will flop down over the taillights and exhaust ports. I'm a little nervous about exercising the blue-on-blue latches too much, considering how easily the paint seems to have flaked off elsewhere. A 1/24 Supergirl figure is also included, standing with her hands on her hips. The sculpting is OK, but suffers from the same lack of care as her truck. Her stockings were left unpainted, giving her lumpy thighs, and I don't think there's a paint seam below her neck where they managed to hit the edge correctly. Chipped paint runs up the back of her left arm, and there was a hair stuck in the paint under her right arm (plastic or organic is impossible to tell because it was painted along with the arm).

Batgirl had her flaws, but they were more limitations of the medium than poor workmanship. Supergirl and her truck are actually both decent sculpts that seem like they only made it to the paint booth at 4:30 on a Friday. If you can find one where a little more care was taken, this is a good set...otherwise not so much.