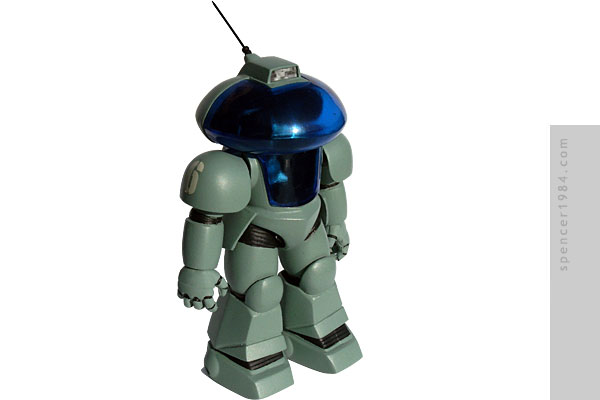 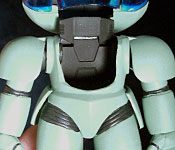 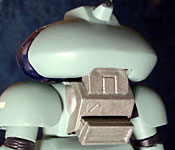 From the mysterious tripods in War of the Worlds to the biomechanical Evas in Neon Genesis Evangelion, I've always liked mecha...but finding models in my preferred scale of ~1/24 can be a bit tricky. Most are too large to exist in that scale, and the few that do are generally way out of my price range (some day I'll track down one of those 1/24 Gundams). Occasionally I do luck out, though, as was the case with these EVA suits from Bandai.

These kits are credited with being the first to include the smooth joints that have become a staple of Bandai...and while that's great in theory, the execution was nowhere near what it is today. The parts were comparatively rough, with several ill-fitting components, a few side-to-side mismatches, and lots of filler needed to smooth out the panels. Fortunately, the bulk of the finished figure is a single color, so I was able to do all of my assembly and cleanup work without having to worry about masking off areas later.

In addition to the cleanup work, I also modified a few components. The antenna was misshapen, so I replaced it with a straight pin and a pair of glass beads for the insulators. The skirt and shoulder pads were set too far away from the body, and so were narrowed and mounted according to the animation model. This eliminated the shoulder and hip articulation, but I hadn't planned on keeping it anyway. Lastly, I replaced the hands, which were practically amorphous blobs out of the box. I had first tried to use a set of hands from a small scale Gundam, but they were too delicate and didn't fit the look of the rest of the suit. I then considered a set of hands from a Transformers figure, which ended up going the other direction and were too clunky to use. I finally found what I needed in a 6" War Machine figure from the Iron Man 2 movie line. These hands had the correct rounded look, and since the figure was twice the scale of the suit they ended up just oversized enough to work. All I had to do was cut off the wrist joint and reshape the base of each hand to taper into the forearm, and they were perfect.

With the modifications complete, I painted the whole figure Krylon Jade Green. The joints were then painted Polly-S Grimy Black, while the antenna and the inside of the suit were painted Polly-S Steam Power Black. I used Testor's Steel for the back pack, which may be a bit lighter than the animation model but looked good enough that didn't want to change it. Finally, the shoulder markings were applied from a generic Macross decal sheet I had on hand and the head light was a leftover from the sheet I used on the A-Team van.