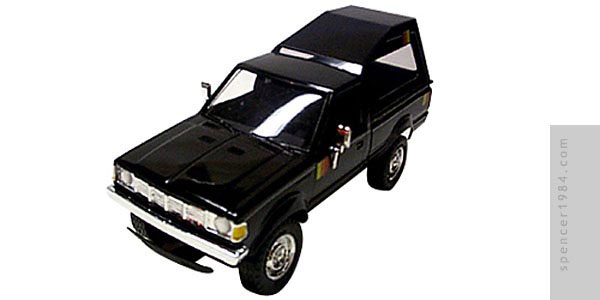 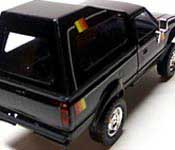 As with many of my Transformer models, Trailbreaker was more of an evolution than a construction. Although the original toy was a Toyota Hilux, the scarcity of Hilux models meant that I had to make do with modifying a similar pickup. Because liberties were taken between the toys and their full-size counterparts, I had to guess at many of the details to complete the model. I was finally able to track down a true Hilux model a year or two after the model was completed, and so I went back to correct some of the errors I made previously.

The size and shape of the Datsun 4x4 was pretty close to the Toyota, so I was able to get a decent looking replica without rebuilding the whole kit. To alter the most obvious difference, I removed the original grill/headlight/bumper assemblies and replaced them with scratchbuilt pieces made from styrene and covered in Bare Metal. The taillights were moved to the rear of the box sides, and the word "Datsun" was removed from the tailgate. The cap was scratchbuilt from sheet styrene and clear plastic, using Trailbreaker's cap for reference. I left the chassis nearly stock, but I did have to remove the locater pins so that it would fit into the body shell properly.