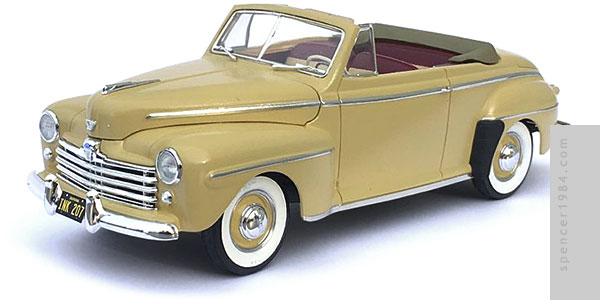 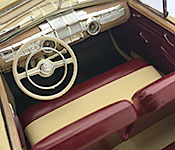 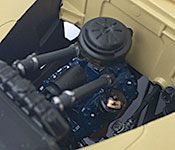 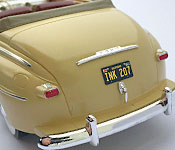 I had originally bought this kit with the plan to build it as White Lightning from Grease. Then Revell announced their plans to release an official version of that car, so I shifted plans and instead built it as the car gifted from Mr. Miyagi to Danny LaRusso in the original Karate Kid. Since this kit was essentially that car with different license plates, I decided to build it box stock to see what I was in for with the then-upcoming Grease kit.

For the most part I was very happy with the quality and level of detail here. The stock flathead engine has some great parts like four separate radiator hoses, excellent detailing on the heads, and a generally solid fit. The oil filter has a hollow back, the only thing that was somewhat disappointing. The decals for the filters and hoses were a nice touch, though.

The chassis was also good looking, with separate shock absorbers, sway bars, brake backing plates, exhaust pipe, and a multi-piece frame. Compared to the vintage AMT Ford kit, this was a whole other world. Unfortunately, that fine detailing came with a twist - literally. I never could get all four wheels to touch completely, though after some work with heating and counter-twisting, I got pretty close. There are locators for everything, so either the parts were warped right out of the box or I missed something during assembly. Either way, it will be something I'll have to be careful of on future builds. I also will need to ignore the instructions when it is time to install the bumper brackets. They suggest leaving these until the body is mounted, but doing that means you've got to be very careful of your finished paint while trying to line up the brackets. I think it would work better to fix them to the chassis before anything is painted, and only using the body as a test to check alignment.

Inside, I went with the kit's suggested maroon and tan using Tamiya TS-11 Maroon and Model Master Desert Sand. The wood parts were done with a base of Sand then colored pencils and Tamiya's Weathering Kits to create the grain. Fitting the door panels to the sides was a little fiddly, but using the body as a guide (like I should have done for the bumper brackets) made lining everything up much easier.

There were a surprising number of parting seams to be cleaned off the body considering the high quality of the rest of the kit, likely an unavoidable reality of these fat fendered bodies. I also needed to cut the trunk seam down the sides, as like some older kits the sides just kind of flowed into the rear fenders. Once the body was all prepped, I airbrushed on ScaleFinishes' Maize Yellow followed by Tamiya TS-13 Clear. Trim was mostly done with BMF, with Molotow Liquid Chrome used for the beauty rings, door locks, taillight trim, and anyplace that needed a sprue attachment point repaired. There were quite a few separate pieces of trim—bumpers, headlight bezels, parking lights, grille, hood emblem, hood trim, wipers, stone guards, door handles, trunk trim, and trunk latch—which is nice if you wanted to build this as a hot rod with shaved trim. The kit-supplied tires were simple blackwalls (no decals or inserts), so I painted the sides Polly-S Reefer White to match the movie's whitewall look. As mentioned above, the only change I had to make was a set of custom license plates I drew up in Illustrator.

Despite the few rough patches, I actually really liked this kit. It's a 2002 release marked as a Skill Level 3, which translates to a Skill Level 5 in the system used for the Grease version...either way, they tell you right up front that this is not a kit for beginners. But all those tiny parts and intricate assemblies mean that this turns out a great looking build without the need for aftermarket parts or scratchbuilt details.