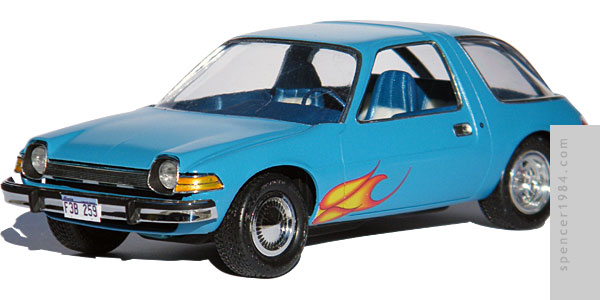 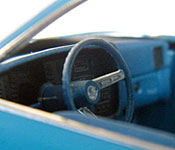 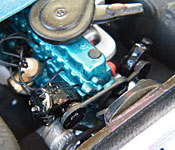 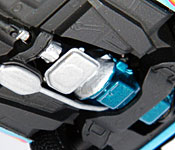 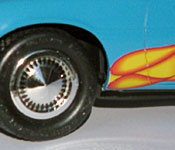 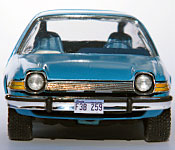 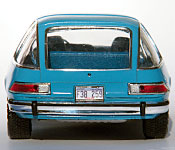 Purchased long before Round 2 reissued their Pacer kit, I got this as a gluebomb from eBay. Actually, "paintbomb" might be more appropriate: relatively few of the parts were actually assembled, but everything was soaked in yellow, gold, brown, or (most frequently) all three. The body had to soak for several months in Purple Power before I could get the paint loose, but eventually I was able to strip it back to something useable. Once the paint was gone, I removed the "Pacer X" badges and trim, fixed a broken roof pillar, and painted it Model Master Big Bad Blue (coincidentally, a nice shelf mate to go with my Big Bad Orange General Lee). Typical for the time this kit was originally released, the headlights were opaque chrome plated parts, cast as part of the grille. I drilled them out and replaced them with a set of lenses I had in my parts box. The decals were modified from the ones I put on my 1/64 custom, the trim was done using Bare Metal Foil, and the license plates were drawn in Illustrator.

The interior was, unfortunately, a total write-off. There was no way to save it without destroying the already faint detailing. By this point the reissued kit was available, so I got one as a parts donor (the body having been the only part of the kit to get altered over the years). This proved to be a mixed blessing, as Round 2's new plastic reacted badly to the paint despite my taking all of the usual precautions. A second attempt yielded better results, though I still had to do some touch-up work later. Paint issues aside, the only other real problem I had with the interior was the ejector pin marks located in all four footwells and the rear cargo area. It's nearly impossible to clean these from a textured area, so I didn't even try it: four floor mats and a new rear carpet made of coarse-grit sandpaper covered these nicely.

As bad as the interior was, the chassis and engine required relatively little work. I was able to do some spot repair work, then repainted the chassis flat black and the engine AMC Teal. The remaining details were brush painted and the engine got some very basic wiring.

The final detail was the wheels. Garth's Pacer had stock front wheel covers and wagon wheels in the back, while the only kit option was the Pacer X's mag wheels. The tires and rear wheels were sourced from my parts box, while the front wheel covers came from the Hogan's Heroes Jeep (the Jeep only includes one hubcap, but I was able to get another from a fellow modeler). The vent holes near the edge of the cover were a decal I made based on the 1:1 car's cap, applied directly over the chrome and then clearcoated with Future to hide the edge.