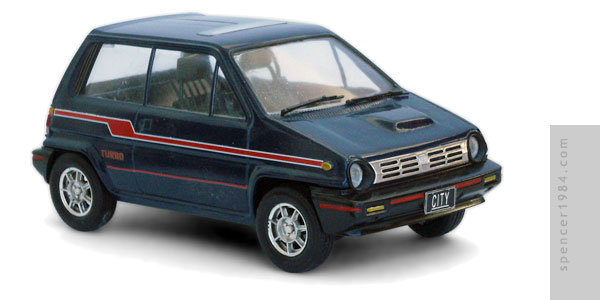 Skids was always the forgotten Autobot. His cartoon and comic book exposure was minimal (with a notable exception in Transformers #20), and I don't know anyone who really, really wanted his toy. On top of that, he was the theoretician of the group, which meant he didn't have any cool features like a force field, a hologram projector, or the ability to teleport - he was just the guy who kind of looked like a minivan.

Fortunately, the little car Skids was based on is far more popular. This particular kit was made by the now-defunct Otaki, and was a near-perfect representation of Skids.

It was a motorized kit, and one of the few front-wheel-drive models I have seen (and yes, the steering did work). Though that meant fewer parts for the base car, the number of accessories were quite impressive: side flares, a rear spoiler, the hood bulge, optional wheels, and no fewer than four grill options were included. In addition, a boom box and set of tennis racquets were included to toss into the back of the car - complete with a functional tailgate and folding rear seat! With all of these options, the only things I had to do to make the model match Skids was to mold the bulge into the hood and make a sunroof.

Skids' dark blue was replicated by layering several coats of Krylon Midnight Blue, and the decals are a combination of kit provided and custom made material.