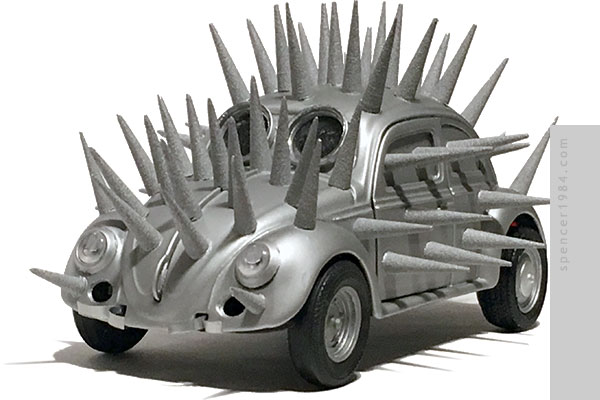 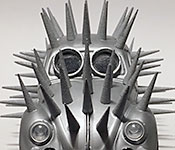 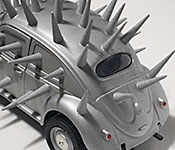 I had originally picked up this Beetle with the thought that I may be able to use parts of it to build a Herbie replica. Then I found Fabbri Editori's diecast and I suddenly found myself with an extra vintage Beetle. The Cars that Ate Paris seemed like a good idea, but I wasn't looking forward to scratchbuilding dozens of spikes and ready-made possibilities, like nails or golf tees, just didn't have the right shape to them.

Enter Shapeways. With a little work, I was able to draw up a grid of 64 spikes and have them printed and sent to me. All I had to do was snap them off their base, do a little sanding, and glue them to the Beetle.

I also drilled out the horn vents, replaced the wheels and tires with some from my parts box, and added wheel rims to create the windshield portholes. The bumpers were separate pieces, which I simply left off and made new brackets from an aluminum can. Once the modifications were done, I masked the windows with Silly Putty and sprayed the whole car Duplicolor Chrome followed by Dullcote. The wheels were painted Testors Flat Aluminum, the front brakes were done with a silver Sharpie (which is slightly darker than the Testors paint), and the portholes were finished with Molotow Liquid Chrome.