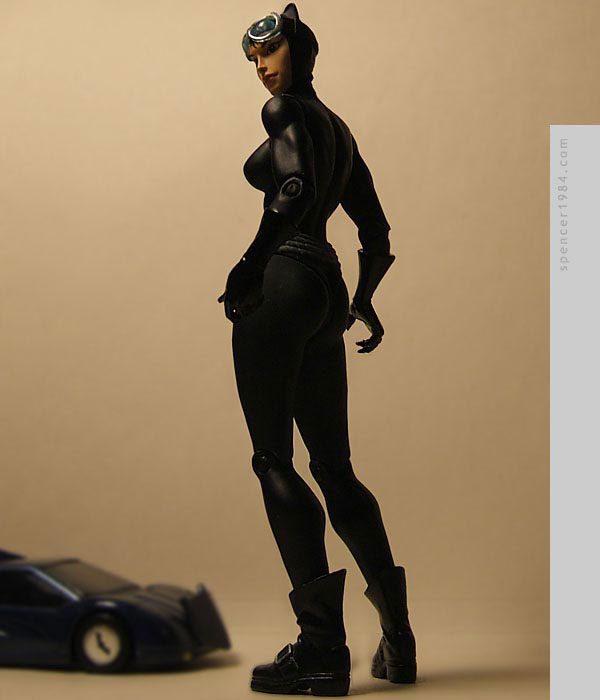 Cool Fact
Halle Berry received a Razzie for her role in 2004's Catwoman, and was the first actress to appear in person at the ceremony to accept the award.

The 2002 - 2003 story arc Hush quickly became a fan favorite, prompting a line of action figures from DC Direct based on Jim Lee's art. Lee tends to draw his women a bit on the "leggy" side, a style which was brought (in varying degrees of success) to 3D form by sculptor Tim Bruckner. Huntress kept pretty realistic proportions, and Poison Ivy and Harley Quinn made the extra length work well. Catwoman, unfortunately, looked like she had dolichostenomelia more than anything else.

To make her look a bit better, I ended up removing 3/4" from each leg: 1/2" from the middle of the thigh, and 1/4" above each boot top. The cut ends (both upper & lower leg) were drilled and pinned with stainless steel rod, and the resulting "step" in each thigh was removed with a lot of carving, sanding, and filling. Once I was happy with her revised legs, they were sprayed with Krylon flat black to match the rest of her costume. The tops of her boots were hollowed out a bit, and drilled to connect to the stainless pins at the bottoms of her legs. The pins let me rotate and pose her feet to allow her to stand up like she did originally. Once I was certain she would stand correctly, I glued her feet on with 3-minute epoxy.

The last thing I did was replace her cloth whip woth a 9" section of thin wire: the diameter looks better, and I can curve it to look more natural (instead of the cloth line that had a tendency to kink).