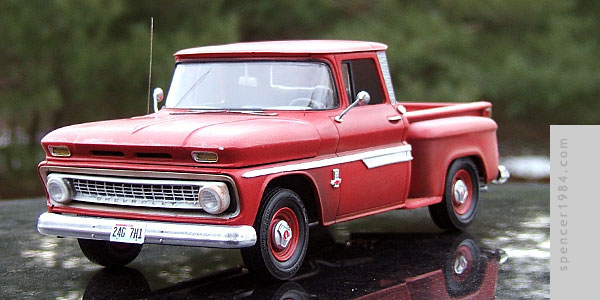 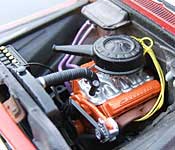 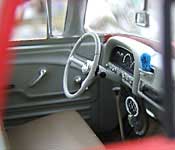 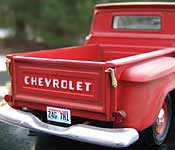 This build was a bit of a learning experience for me - I knew (and still know) very little about the Twilight universe, so it was all pretty new to me. I've not read the books, and have only seen the movies once each by the time I finished this build. I will admit that there were some cool aspects, though, like the main character's classic Chevy truck.

When Revell reissued their '65 Stepside, it seemed like a perfect match. I had built the Fleetside version of this kit for my garage diorama, so I knew that it would be a nice kit. I had been working on it for a week or so when a member of the Scale Auto boards pointed out that Bella drove a '63, not a '65. Luckily, I had one of AMT's equally-nice '60 Chevy kits in my stash, so I was able to take the cab, dashboard, and door panels from that.

It wasn't a perfect fit: the floors of the cabs were very different, so I had to modify both the bottoms of the door panels and the outer edges of the interior tray (I didn't want to use the AMT chassis because the '60 still had the older torsion bar suspension). Rather than try to make the modified parts match up perfectly, I glued the door panels and dash to the inside of the cab, and let them float near the floor. This allowed for some wiggle room near the floor, plus it let me make sure the dash and top edges of the door panels were mounted correctly. I also had to do some cutting along the back edge of the cab, inner fenders, and bottom edge of the firewall so that it sat correctly.

Other than those few modifications, most of my work was spent detailing what was there. The chassis received new shocks and new rear springs, while the engine was wired and plumbed. Since it was supposed to be a recently rebuilt motor, I did not weather it as much as the surrounding bay and undercarriage. I figured that the radiator, battery, and exhaust pipe were all likely replaced as part of the engine rebuild, so they are also made to look relatively new. The interior received new door pulls, the column shift was removed and a floor shift was added, and the movie-specific personal items - the stuffed animal in the ash tray, dreamcatcher, and modern radio - were scratchbuilt items.

The body was painted Krylon Banner Red, with Dullcote and weathering applied to match the movie truck. The grille and side emblems are from Modelhaus (the cast-in headlights had to be drilled out and replaced with parts box items), the side trim is made of .020" styrene, and the small hub caps were from Revell's '64 Fleetside truck. I also added a radio antenna and replaced the cast-in tail gate straps with wire. The final touch was a set of 24G-7H1 Washington plates...I'm not 100% sure they're screen-accurate, but they are my best estimation of what it should have been wearing in the movie.