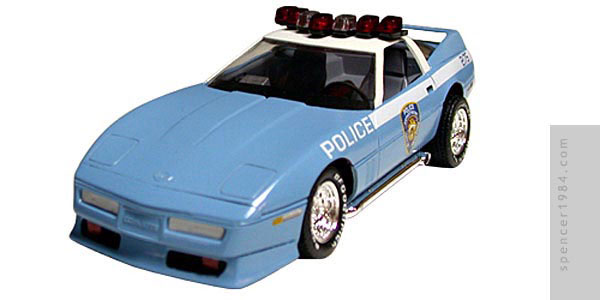 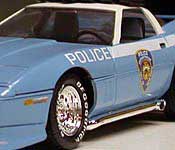 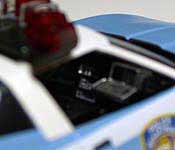 On the outside, this car looks nearly stock. The side pipes, air dam, and spoiler might be a bit odd for a police car, but not too uncommon for a Corvette. The Corvette's interior was upgraded with standard Police equipment like an onboard computer (replacing the glove box) and a fire extinguisher. The underside, however, is a bit of a different story: the trailing arm rear suspension was totally replaced with fully independent A arms, the fuel tank was moved forward, and aerodynamic panels were added to reduce drag.

I built this model as if I was building a 1:1 project car. Since the focus of an NYPD car is city driving, raw V8 power and straight-line performance are not as crucial as quick start-and-stops and cornering ability. With that thought in mind, I tried to make the car as nimble as possible with things like steering-responsive rear wheels and a better balance between the front and rear axles.

To finish the car, I used Testors Gloss Light Blue over Flat White, and decals from Chimneyville Hobby. The light bar is a modified unit from Lindberg's Crown Victoria.