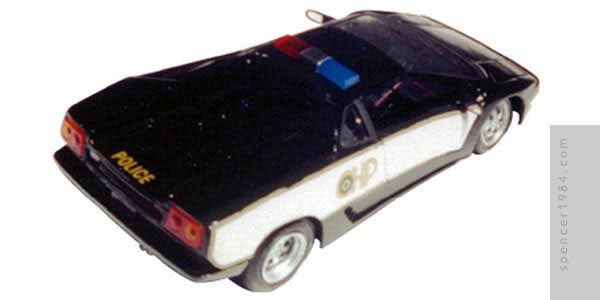 This model was one of my first times working with a die cast kit. While it was not a bad model, there were some things I was disappointed with (though in all fairness, some were not the kit's fault).

To begin with, there was a great deal of flash on the model, on both plastic and metal parts. Nearly all of the vents, scoops, and panel seams needed to have some degree of cleanup to remove excess material. Also, it seemed like the car was halfheartedly put together; several parts (such as the door panels or mirror inserts) were not lined up correctly, but fixing these were simple. There were several things I did like about the car, though. The front wheels are posable and tied to the steering wheel, so I could give the car a little more interesting pose very easily. The tires and wheels are very well done, to the point where I didn't know they were hard plastic until after I got it out of the box.

Once the body was disassembled and cleaned up, I painted it PlastiKote Gloss White and Gloss Black. For some reason, the paint did not adhere to the primer on the driver's door (but only that door), and needed to be repainted after the rest of the paint job was "finished". When the paint was dry (again), I applied decals and a light bar from AMT/Ertl's Taurus police car, and stripes from an old AMT fire truck.