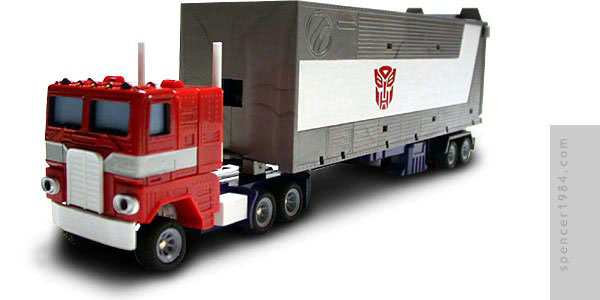 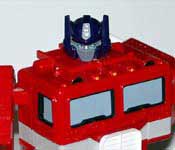 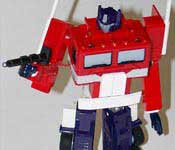 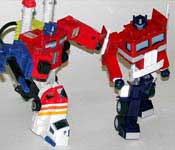 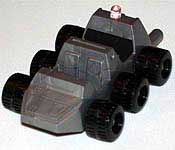 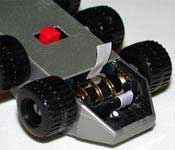 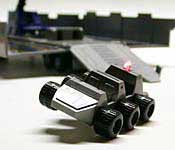 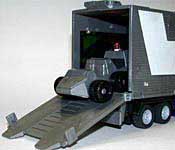 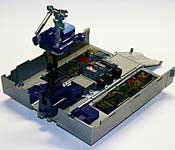 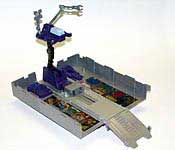 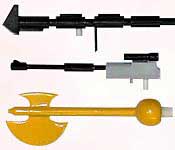 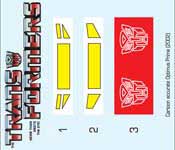 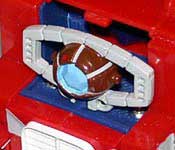 Special thanks to KCC Collectibles/TransRepro.com (for the Matrix accessory) and Seibertron.com (for the use of their screen capture archives, plus a plug on their web site)! As with previous years, all proceeds from this auction went to local charities over the holiday season.

Cartoon accurate figures have long eluded Transformers fans, especially figures from the original series. Those that did look like their TV counterparts often sacrificed the ability to transform: Action Masters and the later PVC figures look great, but unfortunately lose one of the key concepts of the TF universe. Then, late in 2001 Takara's "New Year's Convoy" was closer to the mark with blue eyes, a blue windshield, and a Matrix of Leadership accessory, but still lacked several elements that made the cartoon Prime unique. That's where this figure comes in.

Based on the first release of the figure from 1984, I studied over 200 individual screen shots and spent more than a month making Prime look as close as possible to his cartoon counterpart while remaining a fully functioning Transformer. Everything about the figure has been upgraded, from the smallest accessory to the trailer.

I started with the cab section, which was completely disassembled and all the plastic parts were cleaned. The diecast parts were repainted to match their original colors, while the head, wrist/headlights, wheels, windshield glass, and other details were painted to match their TV look. The side windows were recut into larger square-shaped openings, and a horizontal bar grill, square fuel tanks, revised bumper, and smooth exhaust pipes were scratchbuilt from styrene stock. Finally, the gray stripes on the chest and toes were cut from automotive pinstriping material.

The original Optimus Prime had above-average posability for the time, but his joints were ratcheting plastic and would start to wear down after only a few transformations. To fix that, I replaced the shoulder joints with all-new smooth rotating sockets and upgraded the elbow joints with rubber donuts to smooth out their operation. The most significant upgrade, however, is the all-new ball and socket hip joints. Combined with a set of knees that allow over 90° of movement, lower leg swivel joints, and more active ankles, Prime can now stand in a number of dynamic poses formerly reserved for Beast Wars or later figures. To further help with posability (and overall appearance), I made the front wheels a separate assembly that could be removed before transformation.

Once the cab was well under way, I moved on to the trailer. The toy's original stickers were replaced with a set of light gray stripes laser-printed onto card stock and glued to the sides of the trailer. Inside, the main deck was smoothed and repainted to contrast slightly with the rest of the trailer, and the robot's windshield was painted to match the cab of the truck. Finally, I removed the "stop tab" under the trailer's deck, which prevented the launch arm from extending fully. Instead of a lazy roll down the exit ramp, Roller can now fire straight out the back door and end up several feet from the trailer.

Finally, I moved on to Roller's upgrade. In the cartoon, Roller had a flashing light where the toy had a clunky gas pump, hose, and nozzle. Though my version doesn't flash, I was able to squeeze batteries, a switch, and a functioning light into Roller without sacrificing it's appearance.

Although this was aimed for collectors, I made sure that Prime had a degree of play value. In some cases, it can even take a bit more than the original figure: the bumper, grill, and exhaust pipes were all molded in white, so chrome/paint wear would not be an issue. Also, the trailer's overly delicate door hinges have been upgraded (including one full replacement) and are significantly stronger than they used to be.

With all of this work done, my final concern came down to the accessories. In the end, I included a left and right closed fist set, an open left hand, a custom made battleaxe (to reinact his fight scene with Megatron atop the dam), a cartoon-accurate gun, and a "gun mode" Megatron. A Matrix of Leadership from KCC Collectibles added the perfect finishing touch to the figure itself, and for a bit of G1 nostalgia I also added a custom made G1 style instruction booklet and sticker sheet (which included cartoon-style Autobot logos and optional front bumpers) to the package.