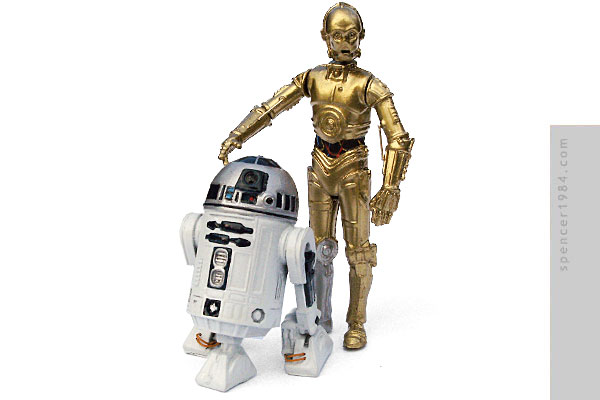 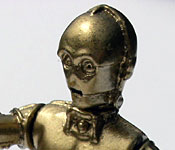 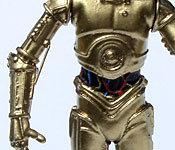 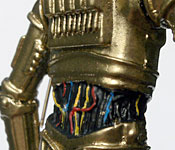 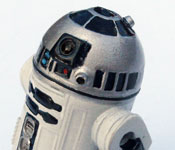 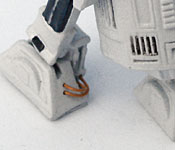 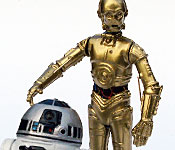 Star Wars droids are one of the few areas where I venture more than one or two degrees from my preferred scale, though I still sometimes wish that they were a little bit closer so that I could have a single collection of "TV & movie stuff." So when I came across a Star Wars-themed chess set, I was happy to discover that by a quirk of fate, the figures depicted on the pieces were nearly perfect 1/24 scale representations of the characters.

The game pieces were cast in black vinyl, then painted to look like vintage metal. So the coloring wasn't that great for realistic figures, but the sculpting was excellent. They just needed to be removed from their bases, have some minimal cleanup done, and they were ready for new paint.

For Threepio, I also sliced off his arms and head, then pinned them back into place to allow for some articulation. To recreate his gold finish, I started with a base coat of Krylon Glossy Black and then applied several light coats of Krylon 14K Gold. This provided a pretty good match for the C-3P0's original "Tatooine" finish, which was finished with silver paint for his right leg and some light overall weathering. I then painted the black midsection and his joints, and carefully painted his midsection wiring.

Artoo was a bit trickier to get off of the base thanks to the thicker tripod legs, but otherwise was a simple repaint. He was basecoated with Rustoleum White primer, then the dome, vents, and other details were painted with Testors' Silver while the blue areas were painted with Model Master's Insignia Blue. Once the paint was dry, he was sprayed with a coat of Design Master's Super Surface Sealer to both protect the paint and provide a nice satin finish. This turned out even better than expected on his dome, which came out a near perfect polished aluminum color thanks to the combination of paints.

Overall this was a fun set to do, and something I'd like to try again in the future. Fortunately, I have nearly a whole chess set to practice with.