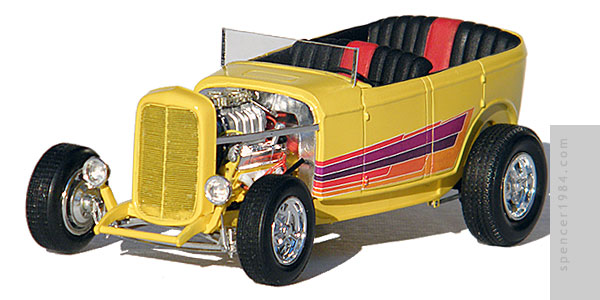 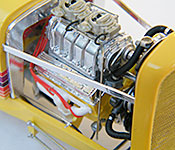 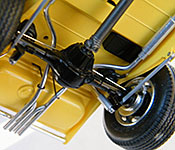 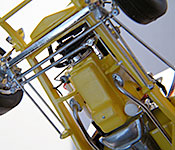 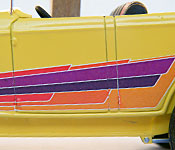 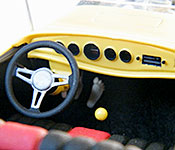 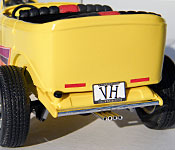 I was originally planning to build the Van Halen "Hot for Teacher" Ford using only AMT's '32 Phaeton, but one quick look at the parts was enough to tell me that I was going to need to source a lot of it from other kits to make this look halfway decent. Having recently finished the Deuce of Spades '32 Ford, I knew the Revell kit had a lot to offer. In the end, the AMT kit was used only for the body, seats, and door panels.

Not that the Revell kit didn't get a lot of work done to it, too. The front axle was swapped with one from a Monogram '34 Ford, and the brakes were from a C4 Corvette. A great deal of the finished chassis was completely scratch built. This included the entire exhaust system, all four shocks, the air bag rear suspension, the front leaf spring, the radius rods (both front and rear), and all of the fuel and brake lines. I don't know exactly how the quad exhaust ports were designed on the 1:1, so I made up my own design with the pipes Y-ing off under the fuel tank. The tires were horribly miscast, so I replaced them with a set of big-and-littles from the parts box. the front and rear bumpers were also replaced with round stock.

For the engine, I started with the block, transmission, and heads from an MPC Firebird, which to my eye is still one of the nicest GM 350 engines ever kitted. The headers, supercharger, and carburetors were from B-N-L Resins, the same guys that made the tires I used for my off-road Charger. As with those, the quality of these parts was excellent, with no pinholes and minimal cleanup. The M/T valve covers from Calnaga Castings were also excellent, only needing BMF to give them the proper chrome look. Good as all the parts were, I still had to do a fair amount of scratchbuilding: the belts, pulleys, hoses, fuel lies, carburetor linkage, coil, and oil fill/breather were all fabricated. I also added ignition wiring organized with looms from The Model Car Garage.

I had actually bought the MCG set for the horizontal bar grille, the wire looms and other details were just a nice bonus. The grille insert was tricky to get in place and has more bars than the 1:1, but once I finally got it seated and painted I think it makes a decent representation. The Phaeton body was poorly cast and needed a lot of relieving to fit the interior bucket (the only two connecting parts I used from that kit, and they still didn't fit right). The firewall, like the radiator shell, was taken from the Revell kit but fit the AMT body nicely. I also made filler panels for the rear wheel coves, and scratch built a frameless windshield and radiator supports. Because of the size of the engine, the body sits too far back on the frame further than it should but it's not so far off that it looks bad.

Rather than try to adapt the AMT floor to the Revell chassis, I simply cut the interior bucket back to the door panels and used he floor from the Revell kit. The dashboard and steering wheel were also used from the Revell kit, while the seats were modified from the AMT kit to have wide center pleats and textured with Krylon Make it Suede. The floor shift was made from a straight pin, and the carpet as made from sticky-back felt.

The main color is Lemon Twist/Top Banana, the same paint I used for my Joe Dirt Charger. Graphics were drawn up in Illustrator and printed onto decal stock. The final touch was a "VH" license plate wrapped in a frame from the MCG set.