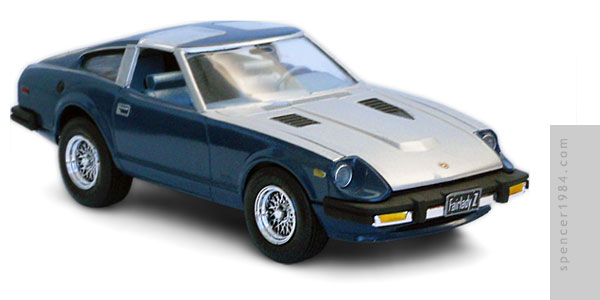 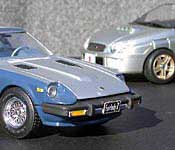 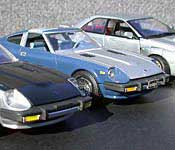 Cool Fact
Most of the original Transformers had names appropriate to their personality and/or function, and Bluestreak's name works on two levels: he's listed as one of the fastest of the original Autobots, and he has a tendency towards talking incessantly and inanely.

This kit is almost entirely box stock. It has some mild suspension work, but the car looks like a standard 280ZX from above.

Going back to the inspiration for this kit, there are actually three versions of Bluestreak (a.k.a. "Blue Streak"). The earliest version had this paint scheme; silver hood over dark blue body. This was found on the Diaclone version of the toy (before they came to the U.S., the Transformer toys were part of a series called Diaclones), and it also appeared in the first issues of the original comic books and TF catalogs.

The second version of Bluestreak is what was used for the actual Transformers toys, where the car was painted solid silver. Finally, in the cartoon series, Bluestreak still had a silver body, but now had a black hood. To me, having a primarily silver car named "Bluestreak" sort of loses most of it's impact (the name did also apply to his personality, but how many of us actually applied the proper personality traits to the toys when we were kids?).

So, I went with the early Diaclone/comic version, and painted the car Testor's Metallic Silver over Model Master Blue Angel Blue. The interior of the car is Dupli-Color GM Metallic Blue and Testor's Flat Black.