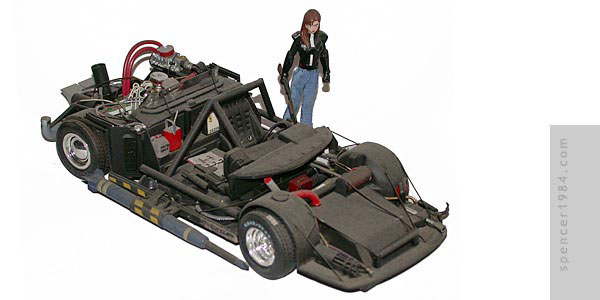 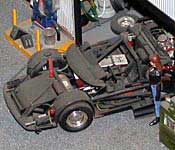 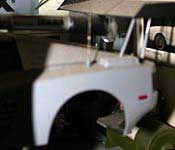 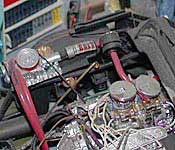 This was the first kit I got that ended up being used on my diorama. It started out back in 1993 as R-M's Ferrari Testarossa kit. I had intended to build it into a race vehicle, but that quickly changed. I saw Mad Max again after many years, and decided I would turn the Ferrari into a high performance post-nuclear vehicle.

I started by building the chassis and body as two separate objects. The car would be like a Funny car, with a solid removeable body shell.

The body has only minor modifications; the addition of a rear spoiler, front and rear bumpers, air scoops, and the forced-air intake system. Driving lights and window reinforcements were also added, and the body was generally abused and weathered. The main shell is Testor's Flat Gray Primer, and the boot is Testor's Metallic Silver.

The chassis is where the most work went. I started with the original floor pan, and built off of that. The roll cage, bumpers, forward fuel tank, and frame reinforcements are all scratchbuilt. The seat, center console, and dashboard are the originals from the kit, but without a body, they had to be mounted differently. The fuel cell in the passenger area of the car is the gas tank from a Caprice kit, as are some of the drivetrain components. Extra details on the chassis include a secondary fuel tank, grappling hook with cable, first aid kit, self-destruct mechanism, gatling gun, plasma gun, reference manual, radio and radar equipment, and 4 wheel drive.

The engine has two 4bbl carbs, a supercharger, turbochargers, and a forced-air intake, plus it has secondary fuel systems of nitrous oxide and alcohol. A pair of rocket thrusters has been added to the bottom rear of the frame (basically, anything that would make the thing go faster, no matter how illogical, was added). The chassis is primarily Testor's Flat Black.

The figure is from a Macross Valkyrie model kit. I shortened her legs so that they were a realistic length, and added jeans using fabric seam patch material. The rest of the figure is detailed with paints, chalk, and charcoal.