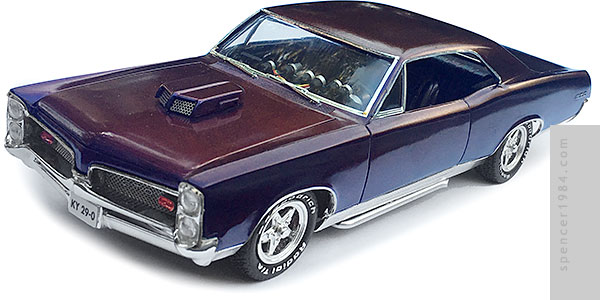 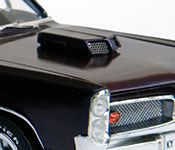 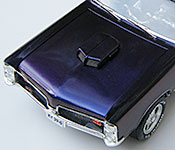 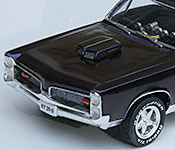 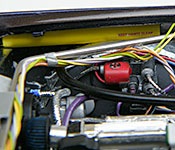 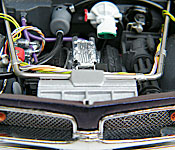 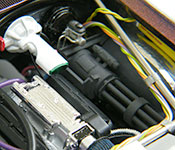 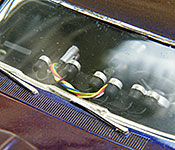 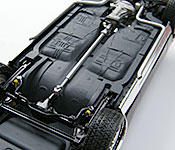 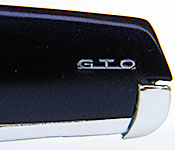 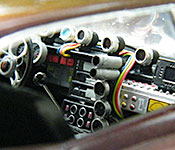 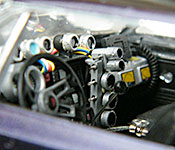 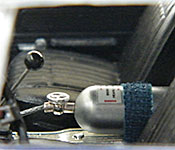 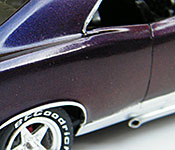 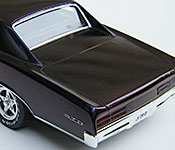 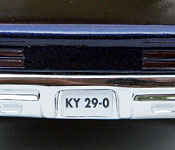 When I started work on this, I had actually planned to do little more than a box-stock build. Maybe try to do something to make the kit-supplied wheels look less flat, and add a few details here & there, but that would be it. Then I started to work on it. The kit was originally produced back in the 1960s, and had been through several variations since then, including a brief stint as an altered wheel base dragster. Almost nothing was straight, parts fit was questionable at best, and the overall casting was more flash than part. My plans quickly changed.

The engine was the first thing to go. The kit-supplied piece was terrible looking, and trying to make something decent out of it was going to be an exercise in frustration. I had a '97 Firebird in my unbuilt stash, though, and the LT-1 seemed like it would have been a nice upgrade to the street rod depicted in the movie. This was built as per instructions, though I used a short cold air intake instead of the Firebird's snorkel. The Firebird also donated the front and rear chassis sections, along with their suspension components. This ensured a good fit for the engine, and helped straighten and properly detail the underside of the car. The pieces fit the GTO chassis surprisingly well, needing only some tweaks around the rear axle hump and trunk floor. I also made a few adjustments to the way the axles were mounted, to get the stance and location of the wheels as correct as possible once the body was on.

Speaking of the body, that also needed more work than I expected. The biggest challenge was the leading edges of the fenders, which had to be substantially reshaped before they even came close to matching the headlight bezels. I also removed the door handles and extra trim, straightened the sides of the body, and filled in several sink marks. I also cut out the front of the hood scoop and fitted mesh screens in the openings. Once the work was done I painted it Spaz Stix's Red/Blue/Purple...a color that they don't seem to make any more, but was a nearly perfect scale representation of the movie car's Dazzleberry. The trime was done in BMF, and the solid chrome headlights were replaced with some clear lenses from my parts box.

The interior required the least amount of correction work, needing only moderate clean-up. What it really lacked, though, was most of the movie's tech detailing. The kit included a four-spoke steering wheel and the six gauges that sat on top of the dashboard, but that was it. Everything else had to be scratchbuilt of sourced from somewhere else. The GPS and switch/gauge panel on the right side of the dash came from Moebius' Batmobile and Aoshima's DeLorean, respectively. The gauges and shift lights were made from plastic and aluminum, and the center cluster was a combination of custom parts and stuff I found in the parts box. The nitrous bottle was turned from round stock, and the shift lever was scratchbuilt. Once everything was in place, it was wired and plumbed to fit the movie car's aesthetic.

With the interior fully detailed, I decided that all those switches and gauges had to do something (even if we only saw a fraction of the car's capabilities in the movie). I filled the engine bay with everything that I could think of. Some items were based directly on the film—rocket tubes were placed behind the upper headlights and a minigun was mounted to the left of the radiator—but much of it was made up as I went along. Even though much of it was nonsensical (there's a sideways Mr. Fusion in there, for example), the effect here follows the interior very closely: there are enough recognizable things to make it seem like everything actually has a purpose.