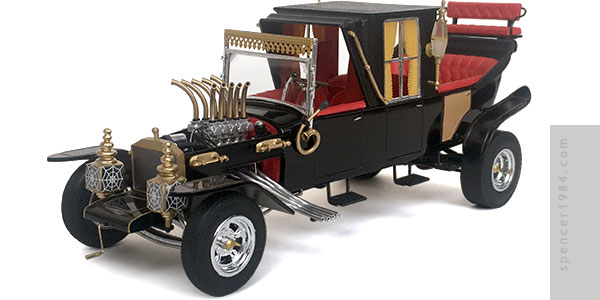 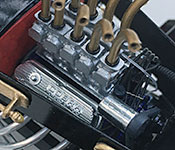 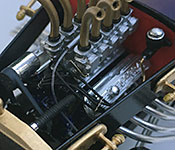 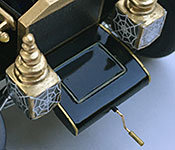 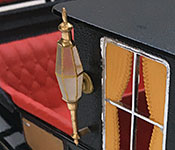 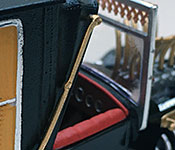 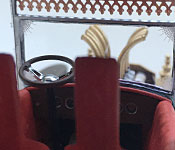 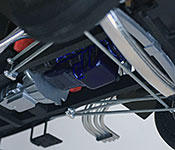 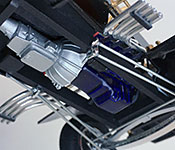 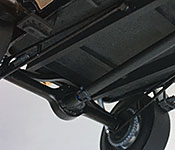 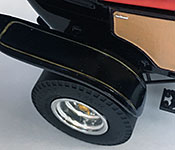 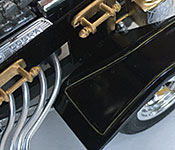 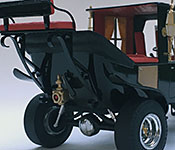 I had first started this kit as part of a community build project celebrating legendary designer Tom Daniel. While the bulk of his work in scale modeling could be found in the dozens of Monogram kits he came up with over the years, the Koach was also part of his repertoire. He was hired to draw up the design by Barris, then it was brought to life in Barris' shop by builders Tex Smith and Dick Dean. The final car differed from Daniel's design only in its intake manifold and headlights, and was built in a matter of three weeks. I wasn't quite so quick on mine.

That certainly wasn't the way I started out the project. Going in, I thought I'd build it basically box stock, with maybe a little bit of extra detailing for the ignition wires or interior carpeting. But once I really got a good look at the contents of the box, things changed.

My first problem came right at the beginning of the build, when I saw what AMT had provided to represent the 289 Cobra V8. It was so undersized and badly proportioned, it made a pretty passable V6. The cast-in heads and intake manifold, single-piece belt assembly, and simplified carburetors and other details just made things worse, so I ditched pretty much everything and went with a proper 289 out of AMT's '67 Mustang GT kit. I assembled and painted the main components Boyd's Black-N-Blue Pearl, then finished it with the Mustang's chrome valve covers and parts box intake manifold and front accessories. The manifold was topped with the Koach's original "carburetors," which were lousy carbs but pretty decent spacers. The real carbs were ten individual resin cast parts from Replicas & Miniatures of Maryland, topped with scratch built aluminum horns. The exhaust pipes were also scratch built - even though the kit supplied parts didn't look too bad, they were spaced for that little quasi-V6 and reshaping them to fit would have been as much work as just making them myself. Final details include basic wiring, plumbing, and carburetor linkage. The finished engine was mated to a transmission from Morgan Automotive Detail and a scratch built driveshaft using FAB Resinworks U-joints.

The chassis was arguably even worse. Cast as a single piece, it had no floor, little more than lumps to represent the axles, and not even a hint of true suspension details. About the only useful bit was the headlight locators, so I cut them off and binned the rest. From there I scratch built the frame rails, steering, and most of the suspension. The axles were out of my parts box, modified to match the width and stance of the Koach's parts. The front axle was then finished using a combination of Molotow Liquid Chrome and polished aluminum repair tape to give it a bright metal look, with the steering and front suspension parts painted or built from wire to match. More Molotow was used on the rear differential cover, and everything else under the car was painted in various blacks and dark grays.The wheels and rear tires were from the kit, while the brakes and front tires were from my parts box.

Probably the least-changed part of this whole project was the interior. Given what I had seen up to this point it was a welcome break. The floor was flocked with dark red craft suede, while the bucket and seats were painted Testors Flat Red. The curtains were painted Polly S Union Pacific Armor Yellow, and the steering wheel rim and dash face were woodgrained with several shades of brown and accented with Bare Metal Foil and Molotow. The shift lever was cleaned up and refinished with BMF, then pinned to the floor with a custom shift boot made of mini O rings. Although they're almost impossible to see on the finished model, I also added a set of Moon pedals from Detail Master.

The body wasn't too bad, either...at least from the firewall back. Because of the stumpy little engine, the sides of the hood were too short, making the whole thing look out of whack. Once they were lengthened to match the longer frame I made, the proportions looked much better. These were simply sheet styrene, cut into "L" shapes with the long edge based on the measurement from the firewall to the radiator and the height based on the original kit parts. These, the main body, and the fenders were painted Tamiya TS-14 Black, and the roof panels were painted satin black. Round 2 provided decals for the pinstripes, but they were a bit heavy - as were any attempts I made to paint them. So what I did instead was to take a hobby knife and carefully scrape the paint off the raised ribs, leaving thin white pinstripes. I then went over them with a colored Sharpie, similar to what I did for my Terminator 2 Harley-Davidson. Since I wasn't using a bright, brassy gold on any other parts of the car, the result was a very believable match. The rear doors were painted Apple Barrel Caramel, using alternating brush strokes to try to accentuate the woven texture of the insert.

After all this, I still had to do the myriad details scattered across the body. Starting from the front: the headlight buckets, like most of the gold components in and on the car, were stripped of their chrome, cleaned up, and repainted Tamiya TS-21. I decided to go with this color instead of a bright gold chrome as I thought the brighter color would look too busy at this scale, essentially blowing out the details. I did the same for the handles on the sides of the hood and the radiator. Out of the box, the horn was too big for the car - it overlapped the sides of the hood, the door, or both. So I cut off the bulb and bell, then grafted them onto the much smaller curl from MPC Jeep. It then got a coat of the same Tamiya Gold as the other parts. My first attempt at the windshield had me simply clean up the worst of the flash and use the kit-supplied glass. But the longer I looked at it, the less satisfied I was. So I pulled the glass out and threw it away, opting instead for a sheet of flat clear sheet plastic. Fortunately, Round 2 provided two sets of spider web decals for the windshield, so I was still able to include those. While I had it apart, I also reworked the frame, thinning and rounding the edges as well as deepening the groove between the inner and outer frames. The poorly-formed wingnuts on the outside of the frame were replaced with Detail Master PE parts, and the fringe across the top bar was made from gallery wire painted the same UP yellow as the curtains. The steps were made from model railroad cemetery gates which had a neat open scroll and were just about the right size. The forward four were N scale gates straight out of the package, while the shorter rear two were HO scale gates cut down. For the side lanterns, I couldn't think of a way to save or rebuild the kit-supplied parts and opted to replace the lenses with some custom 3D printed parts I had done at Shapeways. These were then mated to the upper and lower lantern parts and painted. The taillight wasn't too bad, but the arm that connected it to the car was a huge fin. I carefully carved out everything that wasn't part of the lamp, mounted it to a new wire arm, and gave it a lens made from a craft ruby. Finally, the scrollwork for the rear seat was cut out and replaced with brass strip and the rail was made from wire.