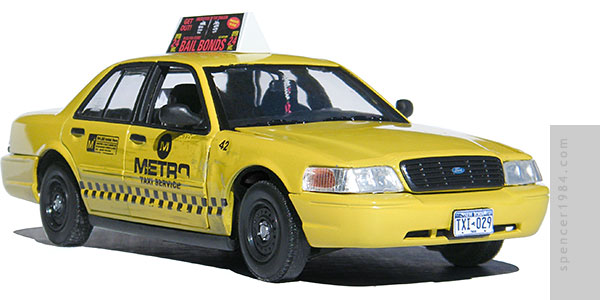 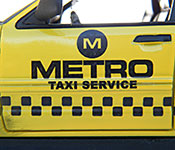 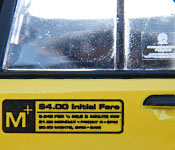 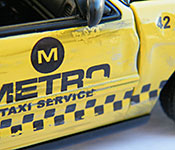 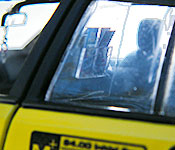 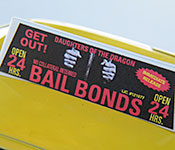 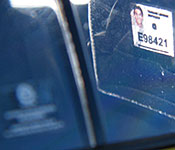 I had originally bought this via eBay with the idea to clean off the old markings and replace them with my own. Then saw the car in person, and realized it was going to take a lot more work than I thought it would. The paint was glopped on over a poorly finished casting, with runs, chips, and embedded debris everywhere. Also, the base of the driver's mirror was so badly formed that it hung off the side of the car like an afterthought. To do it right, I needed to start over.

So, off to the stripper it went, and back down to raw metal. I cleaned up the worst casting errors, and as long as I was working the metal I decided to add the damage shown later in the movie. I used a Dremel tool armed with a large burr to make most of the dents, then went back with a rough sanding stick to do some final shaping. I also filled in the extra "police" holes in the front bumper (used for mounting the grille guard). The car was then sprayed Kylon Bumblebee Yellow and detailed with flat black for the window frames and tail panel. The new markings were all drawn up in Illustrator and printed onto clear decal stock. To get the "sideswipe" effect on the passengers' doors, I dragged rough sanding stick over the finished panels then went back and did some light dry brushing with Testor's Silver and Vallejo's Engine Grime. I also did a little extra work on the nose, removing the headlight mounting pins and swapping the honeycomb grille with an extra slat grille I had on hand.

Inside, I made Dopinder's gajra by slowly drilling white plastic and keeping the resulting corkscrew of plastic as clean as possible. After getting a few the correct length, I painted the red and green areas and then glued them to look like a continuous piece hung around the rear view mirror stalk. The steering wheel cover was made by roughly applying superglue and baking soda to the rim, then painting it without sanding to preserve the "fuzzy" texture. The photo of Gita was a screenshot from the movie, as were the "Fun Pass" and "Haunted Segway Tours" flyers. I made the partition from .015" clear styrene, with a smaller rectangle cut to form the tray that held the flyers. Dopinder's ID card was based on an actual taxi ID, with Karan Soni's head shot as the photo.

The last (and trickiest) detail was the roof sign. Part of the reason I went with this diecast in the first place is that it already had the right shaped topper, but after seeing the lousy paint job and how much work it would need to be cleaned up I realized I'd be better off making my own. The sides were cut from .030" sheet styrene, with the end caps cut from .020" styrene. I sanded and polished the plastic, then added a set of custom-made graphics. These were based on what we saw in the movie, but there were certain details that I just couldn't quite read and so had to make up. Taking a cue from Deadpool's ubiquitousness in the Marvel Universe, I made this the "Daughters of the Dragon" bail bonds service, license #121977 (a.k.a. bail bondswomen Colleen Wing and Misty Knight, first teaming up as the DotD in Marvel Team-Up #64 in December 1977).