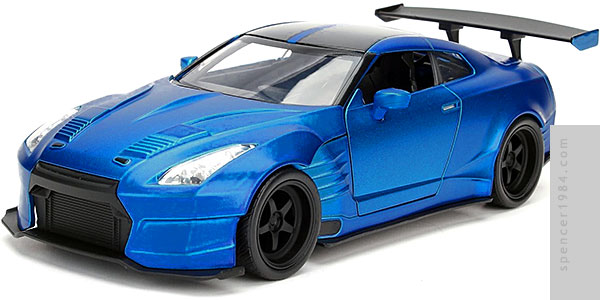 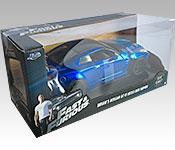 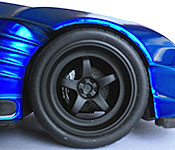 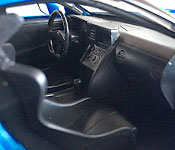 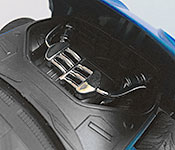 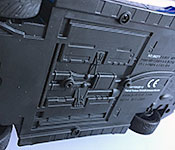 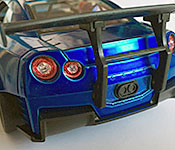 After the team gets their records wiped by helping Hobbs in Furious 6, they are able to return home with their fortunes. Brian takes the opportunity to acquire a Bensopra GT-R, which can be seen in the Toretto's driveway at the end of the movie.

ZThis is an all-new casting by Jada, and while it's good there are a couple flaws that hold it back. First, the good: as usual, the panel lines are nice & tight and the panels themselves are nicely cast with good detailing. Less good? there are some unfortunate parting seams down the ribs on the front fenders, the right skirt has two really ugly sprue connection points that weren't cleaned properly, and there are casting artifacts visible in the top of the rear wing. The body is metal, with black plastic used for the front grille/splitter, side skirts/diffuser (as part of the chassis), exhaust port, and rear wing. The sideview mirrors are softer vinyl. The headlights, windows, and taillights are all clear plastic, with the taillights receiving a clear red paint app to create the Nissan's signature concentric taillights. Head and taillights are backed by chrome plastic, and the mirror glass is also chrome plastic. Most of the satin blue paint is OK, suffering a bit from thin edges like the F7 GT-R, but helped by the lighter color as was the F7 Road Runner. There is some ghosting on the bottoms of the front fender undercuts, and the panel arounfd the exhaust ports has a rough surface as if it was not prepared correctly. Black paint is used for the hood ducts, skirt ports, trunk pins, A pillars, and roof stripes. Silver was used for the door handles. All of these are evenly applied and correctly placed.

The engine is basic but sufficient given the clamshell hood. Twin turbochargers lead to the intake manifolds, and while these are the only separate parts under the hood they're cleanly cast and set into a tray that's deep enough to provide the illusion of a bigger bay. The surround is nicely detailed with the correct panel breaks and gasket, but the wipers are on upside down. They're molded-in parts, and small enough that they don't detract from the overall look, but they're definitely on there wrong. The interior is outstanding, with excellent detailing on the dashboard, textured pedals, and all of the appropriate levers in place on the steering column and center console. Everything is black plastic, with a single sticker placed to represent the instrument cluster. The chassis is a basic but not inappropriate flat panel. The wheels are the same matte black 5-spokes with low profile tires as on the earlier R35, this time over black rotors and black & silver calipers.

The doors, hood, & trunk open, though the trunk is pretty much negated by whacking the spoiler before the rear lip even clears the body.

Jada has certainly captured the unique design of the Bensopra body kit, though the realities of making a mass-market diecast have forced some compromises. The biggest change is the hood, which hinges at the wrong location (the actual Bensopra GT-R has a hinge above the front splitter, which does not move with the hood) and includes the headlights (these are fixed to the chassis on the original). We never saw what wheels were on Brian's car in the movie, so reusing the ones from his later ride is a fine choice. It fits nicely with Jada's other R35s, making it just a hair big at about 1:23 scale.

This is very much a mid-level casting by Jada, far better than their maximus Charger but not as brilliant as their Ice Charger. The unique design and cool satin blue help it stand out in a crowd, though, and make it a worthwhile addition to any Fast & Furious collection. Recommended.