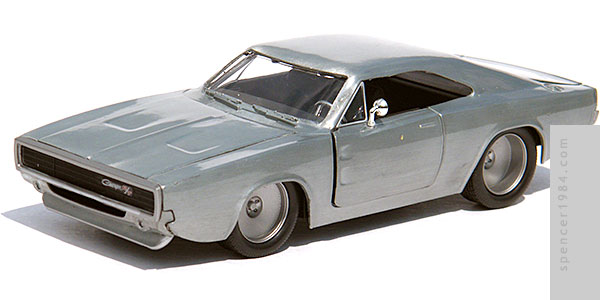 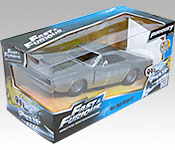 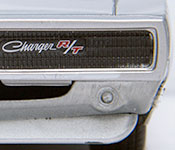 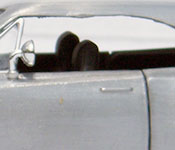 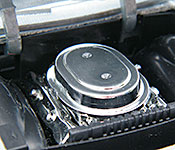 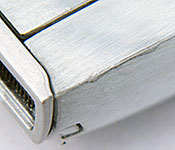 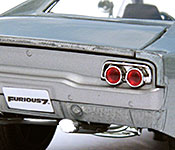 In the coda of Furious 7, the cast and crew said good-bye to Paul Walker and his character Brian O'Connor with a scene of the two stars going for one last ride in cars reminiscient of the ones they drove in the climax of the original The Fast & the Furious. Vin Diesel/Dom Toretto's car was a heavily customized '68 Charger, known off-screen as the "Maximus."

When I reviewed the black '70 Charger, I noted that it seemed to be suffering from mold fatigue. Things have not improved with this release, and are actually quite a bit worse. The ill-fitting panels are all still here, but the car also has a terrible machined edge on the back of the trunk lid and substantial flash in several locations. There was a big chunk of metal wedged between the windshield and A pillar, a wad along the top edge of the left front fender, and the bits hanging down from the drip rails are sharp enough to cut yourself on (this isn't hyperbole - I have to be careful how I pick this car up). Without the black paint, the pieced-together front end is even more obvious, and further exaggerated by a fuzzy casting or paint error where the "bumper" meets the fender. The grille is identical to the black Charger, but a chin spoiler has been added and painted to match the body. The spoiler has an obvious seam, sink marks, and three large paint chips, so even this newly-cast piece is half-baked. The hood looks OK, though, and unlike the black Charger is hinged. The rear fascia is new, and looks pretty good with chrome bezels and red lenses. The engine is not the same piece as what was in the Plymouth, but it looks like it was designed with the same plan in mind. As usual, the wheels are the highlight of the piece, doing a very good job of representing the custom solid billet wheels worn by the 1:1 Maximus Charger.

"Paint" appears to be a clearcoat over the ZAMAC body, with plastic components like the grille and bumpers painted to match. It's a close enough match to look good under most lighting conditions. In addition to the aforementioned fuzzy bit and chips, the black grille has some rough edges and neither the grille badge nor the rear license plate sticker hit their targets correctly.

The doors, hood, & trunk open. The hinges are generally good, and will hold their positions.

Nope. Take all the problems with the previous release, and add in that Jada reused the '70 grille instead of replacing it with a '68 piece.

It's not too often that I refer to something I review as "wretched," but it's appropriate here. The earlier release was bad enough, but this just exaggerates all of those flaws and tops it with terrible QC. It's lazy, sloppy work that never should have been approved, much less released. Only one thing saves it from being a waste of money, and that is the wheels. Basic aftermarket wheels usually cost $10 - $20 (and prices go up should you start looking at specialty materials like photoetch or machined aluminum), so if you get it at MSRP you'll essentially have a good set of custom wheels at a pretty typical price. Unless you plan on using it for parts, though, avoid this one completely.