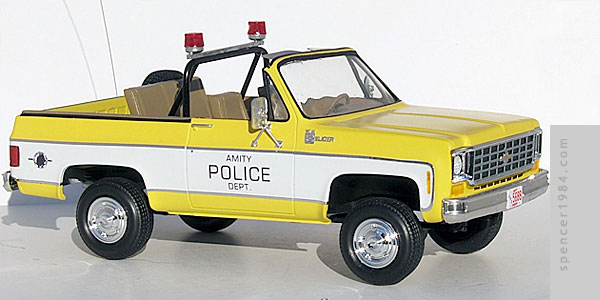 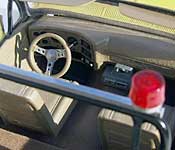 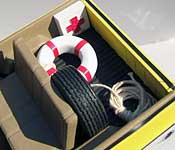 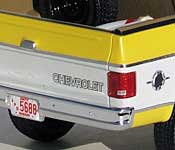 Cool Fact
When "Bruce" the mechanical shark was put in the water for the first time at Martha's Vineyard, it sank straight to the ocean floor. It took a team of divers to retrieve it.
Source: IMDB.com

There must be something about Jaws projects that invite gremlins in to cause problems. Although this kit was less troublesome than Spielberg's robo shark, it was a close race some days. AMT's Blazer is a repop of an old MPC tooling, and its age shows worse than usual. There were some pretty severe fit problems, assemblies that didn't line up correctly, and even a couple of warped components. Add in the modifications needed to turn it into the movie vehicle, and this was very nearly consigned to the scrapyard more than once.

I started by removing the roof and the "Chevrolet" across the tailgate (the earlier Blazer had a smaller logo in the corner of the gate), and then filled in the antenna hole and did some general cleanup to get the body prepped. Once it was ready, I painted it Pactra's Daytona Yellow over white...not an exact match for the 1:1 but it's pretty close. This part of the build actually went pretty good, it was once I got to the interior that I started having problems.

The bulk of the interior is box stock with added details. I painted the seats, dash, and bucket, and added carpeting to the passenger area and a ribbed rubber mat to the rear cargo area. When I went to assemble all of these components, I discovered that the seats don't fit: the holes in the seat bottoms were much smaller than the pegs they were supposed to fit on, and needed to be drilled out. Also, the steering wheel was angled incorrectly...not too noticeable with the roof blocking the view, but it had to be fixed here. With those issues fixed, I assembled the rest of the interior, adding a police radio, first aid kit, life preserver, and spare tire. The roll bar was made from brass rod and plastic rod, with parts box lights. There was no inner tailgate, and the gap at the back of the tub was pretty obvious. I was able to locate an inner tailgate from a Chevy pickup, and cut that down to fit inside the Blazer.

The chassis looked pretty flat, so I opened up the space around the cast-in engine block and added an upper block from an old gluebomb I found at a flea market. Although it isn't very detailed, it gave the chassis some much-needed depth and looked much better. Fit issues plagued the suspension: none of the spring mounts fit correctly (causing one break and one partial break), the driveshaft for the front axle was too short (requiring an extension), and enough parts were warped that the chassis didn't sit level without some work. The most astounding "miss" to me was the front wheel wells, which were smaller and shaped differently than the fender openings on the body. This meant that when I put the body on, the edges of both inner fenders were clearly visible. Unfortunately, since this is a snap-together kit, removing the body to fix this caused a few more broken mount tabs. I reshaped the wheel wells, and after a bit managed to get everything straight and secure.

Once the major assemblies were done, I was able to move on to the final details. The original wheels & off-road were replaced with wheels from AMT's '72 Cheyenne and parts box street tires. I removed the grille guard from the front bumper, reshaped the parts where it was originally mounted, and redid the bumper in Bare Metal Foil to return its chrome finish. Scratchbuilt mirrors, custom plates, and custom Amity graphics finished the look.