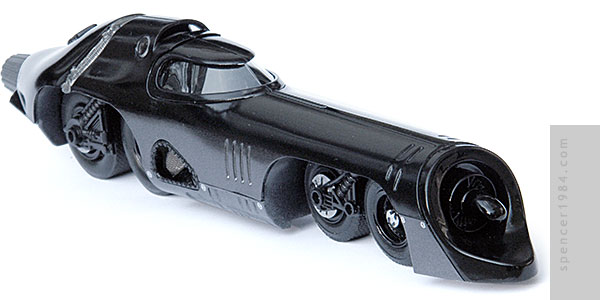 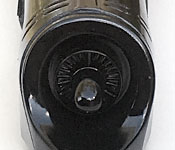 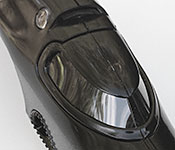 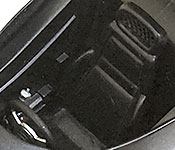 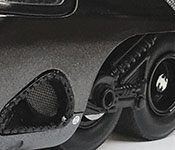 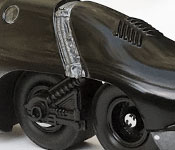 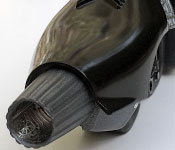 When I started work on the Batmissile, I decided that I wanted it to look as much like it came from the Batmobile as possible. That meant that I'd be deviating from the look of the screen-used props, but that was OK seeing as the different props used for filming didn't actually match each other.

I started with the cockpit. It got the same custom mesh headrest, steering column, and carpeting as the Batmobile, and the control levers were modified to approximate the Batmobile's mixture and throttle levers as much as possible given the reduced space. The top back of the cockpit was made to blank off the roof scoop, so I cut that off and sanded it smooth so the scoop would stay open. Doing this looked much better up top, but meant that the space behind the cockpit and above the rear wheels could now be seen through the scoop. I used part of a G.I. Joe toy and some miscellaneous bits from my parts box to fill in the space and make it look appropriately busy.

The body received a few minor changes. The first was a seam I cut along the top of the canopy and roof scoop, to indicate where the center section had blown out and the two halves came together. While I could have used the kit-supplied glass, I didn't like that it was tinted while the Batmobile's canopy was clear. So I cut my own windshields out of clear plastic sheet, which also had the advantage of leaving a split where they meet and thus matching the rest of the canopy. The porthole window glass was taken from a spare Batmobile kit, and fit just about perfectly. The final body mod was that I opened both side scoops and added fine mesh to the openings. Doing this meant I had to put a divider inside the body, otherwise you'd be able to see right through the car.

The last and biggest change I made on this build was the wheel assemblies. The movie props had eight wheels that were all the same size, a detail that the AMT kit accurately captured. This made the prop a little more stable and thus easier to move around the set, but it also meant that the Batmobile suddenly grew four extra wheels. This always bugged me, and as I've mentioned before I will try to make my models work in-universe whenever I can (often spending way too much time working out the logistics). After trying a few different arrangements, I ended up using the wheels and rear tires from the AMT Batmobile kit, using the front tires from the Batmissile, leaving off the wheel carriers entirely, and modifying the suspension parts to actually hold the wheels. The inline wheel arrangement looks much less stable, but thanks to the the huge rear tires it actually sits very solidly with no risk of falling over. It also has the advantage of moving the suspension pieces inside the body, which should help with this being a narrow getaway vehicle.

While most of the paint job was dictated by what I did with the Returns car, I did paint the lower sides and bottom of the Batmissile gunmetal gray so that it looked like the areas that were originally covered by the sides of the Batmobile were now stripped to bare metal. The front and back were divided between black and gray at the assembly joints as if they were assembled components, while the middle section was faded to look like overspray from the final paint job. A few chrome dots were placed along the bare metal section as connection points for the fenders and sides.