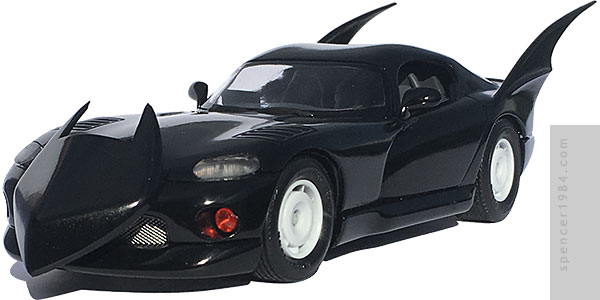 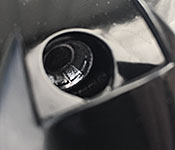 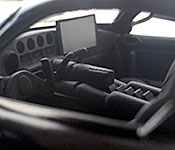 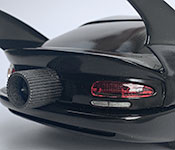 The new Batmobile established in 2000 was a simple sporty jet-powered coupe, and while there was a "standard" look there were also several artists who added their own personal touches to the design. One of those was Roger Robinson, who during his tenure penciling Gotham Knights combined the Batmobile with the then-current Dodge Viper. For this build, I started with the SnapFast Plus Viper from AMT/Ertl. The detail here is as good as it is on their glue kit, but the lower parts count and heftier plastic meant it was a good sturdy base for my modifications.

My first modification was to the headlights. I glued the lenses in place, scribed new lines to create the rounder shape used in the comic, and filled the seam between the old lenses and the hood. I also removed the grille bars, filled in the side marker lights, and enlarged and rounded the forward hood scoop. At the other end of the car, I notched out the rear fenders and installed a set of fins taken from Revell's Batman Forever Batmobile. Lastly, I notched the door frames to match the comic look and sanded off all of the scripts. Everything was then painted Krylon Gloss Black, including the rear window to suggest an armored hatch. My first attempt doing this didn't work so well, as the clear plastic reacted to the paint. Fortunately I had a spare window in my parts box from a previous failed custom, and I made sure to prevent a repeat by first laminating a piece of BMF to the plastic before spraying any paint.

With modifications to the body complete, I moved on to the interior. I wanted to give it an appropriate "high tech"" look, and so turned to my parts box for some greebles. The center console was made from a broken Transformers G1 Skids gun and the head of a Star Wars Battle Droid. Other bits from Gundam and Macross were used to add interest, and a cut-down steering wheel from a Ford Sierra replaced the stock part. Several shades of gray were used to give it a good "no nonsense" look, including Duplicolor Hot Rod Primer, Tamiya German Gray, and Apple Barrel Pavement.

My original plan for the engine had been to use the turbine from a G.I. Joe Skyhawk, but it turned out to be too big for the space between the chassis and hood. So instead, I took one of the intakes from an old 1/16 Batcycle and turned it sideways so it would line up with the hood opening. A photoetch mesh and a couple of random but important looking hoses finished off the little bits of the engine you could see through the opening and grille.

Wheels on this era Batmobile were generally drawn with a directional vented pattern, though the exact size, shape, and number of said vents would vary from artist to artist and sometimes from page to page. After trying a few different styles, I settled on a set of Bakuseed wheels from Bandai with parts box tires. Not only did they fit nicely and have sharp detailing, the glossy off-white they were cast in meant that they looked just about perfect without paint. The only change I made was adding better defined center hubs, made from hex stock and metal transfers.

The mask was taken from the same Batcycle that donated the engine, with the windshield part cut out to leave the bat ears. The exhaust is a glue bottle cap, cut to fit the rear contour of the Viper but otherwise unmodified. The last two details were mirror glass cut from vinyl, and a set of orange driving lights made from an aftermarket sci-fi detail parts pack.