The Flintstones at the Drive-In 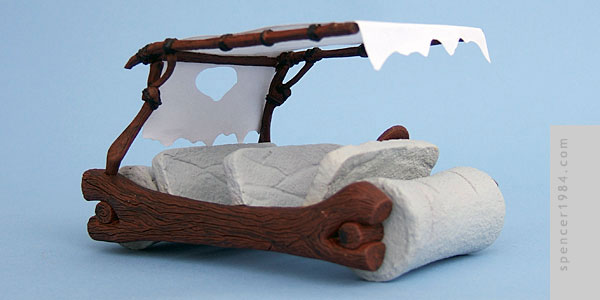 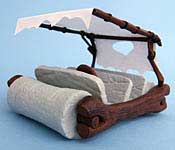 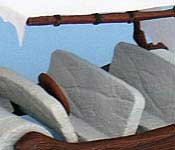 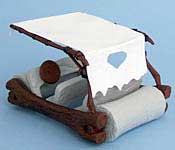 Cool Fact
Although "The Flintstones" is frequently credited as being the first TV program to show a married couple sharing a bed, there was one older: "Mary Kay and Johnny" (1947 - 1950), which was also television's first sitcom and the first program to show an on-screen pregnancy.

After getting and modifying McFarlane's "Flintstones Cruiser," I was really looking forward to seeing series two's box set. Although McFarlane's figures generally aren't to scale with anything (including other figures in the same series), I was hoping that the car would work out to 1/24 scale so that I could finally add a Flintmobile to my collection. Happily, that's exactly what happened. As with the Cruiser, the car wasn't exactly ready for the shelf right out of the box. In addition to the solidly-attached figures of Fred, Wilma, Pebbles, Baby Puss, and Dino, the action feature meant that there were both tabs and holes in the left chassis log that needed to be repaired. There was also a bit of a problem with the car's width: the way it was constructed, the metal axles holding the roller wheels in place were clearly visible.

The first thing I did was remove the car from its base and disassemble it completely (including removal of the figures and the rib tray). The holes in the chassis were filled with plastic pins, and textured to match the grain in the rest of the piece. The seats and dashboard were filled in with superglue and baking soda, and roughed up a bit to match the "stone" look. The same technique was applied to the edges of the rollers, where the seams between the roller bodies and endcaps were most obvious. To make the finished piece look better, I removed some material from the seats, dash, and roof bar so that the sides could be closer together and eliminate the gaps at the ends of the rollers. Once all the repair work was done, the wood was touched up and the stonework was painted light gray. I didn't care for the "two tone" look of the original parts, as I imagine the car was colored that way in the original cartoon to provide a shadow/highlight effect. So, I went with solid gray all around. Now that Dino was out of the car, I needed a new roof without the hole. The new roof is made out of paper, cut using the original vinyl roof as a template.