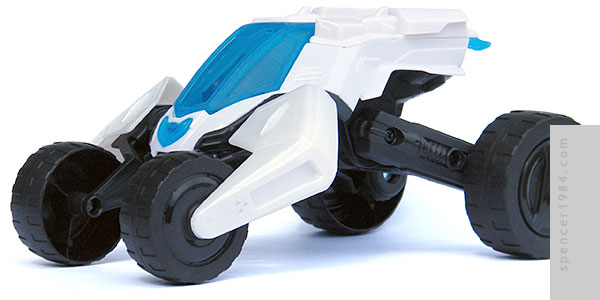 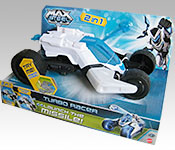 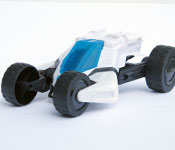 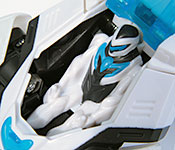 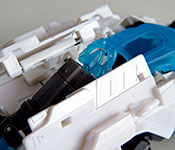 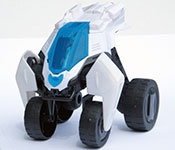 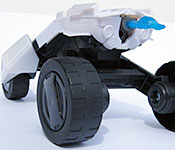 After moving with his mother to the small city of Copper Canyon, 16-year-old Maxwell "Max" McGrath discovers that he is actually a human/alien hybrid with the ability to generate large amounts of Tachyon Unlimited Radiant Bio-Optimized (TURBO) Energy. After being taken to N-Tek, a secret organization whose mission is to protect Earth, he meets N'Baro Atksteel X377, aka "Steel." The two team to form "Max Steel," a super-powered hero with the ability to generate myriad armors and weapons to use in the fight against evil. Should a little extra speed or power be needed, the crew at N-Tek has also provided vehicles capable of their own transformations.

The Turbo Racer is in a an open package, combining a thick tray with a vertical cardback. The tray measures 10" (25.5cm) x 5" (12.5cm), tapering from 1½" (4cm) at the front to 2½" (6.5cm) by the cardback to place the vehicle at an angle while it's on the shelf. The cardback is 6" (15.5cm) tall. The left side of the front edge of the tray has stylized photos of the toy in speed and off-road modes, with a "2 in 1" callout above them. The right side has a drawing of the Turbo Racer next to the Mattel logo and age restriction. This drawing and the "2 in 1" and "Off-Road Mode" callouts are die cut so that when the shelf of the tray was folded over these remained upright. It adds a little extra interest to the package, and is nicely done. Centered on the front panel is "Turbo Racer" and a call to "Launch the Missile!" with arrows pointing at the stylized photos. The side panels repeat everything from the front panel, simply rearranging the elements to fit the different size and shape. They also add in the Max Steel logo. The top of the tray is a blue field with electric effects and two sets of tire tracks leading off the edge of the package (one wide and one narrow to match the different front and rear axle tracks, a nice touch). A separate pop-up is inserted between the vehicle and the front of the package, shaped like an arrow with a large "Try Me!/Press Steel!" on a yellow field above a basic drawing of the action feature. The cardback has a large Max Steel logo in the top left corner, and the titular characters on the right along with another shaped edge. Between the two is another "2 in 1" callout, and the clear blue plastic missile captured in a plastic blister. The back of the package has large versions of the stylized photos we saw elsewhere, along with some basic instructions, all of the co-sells, a call to visit their web site, and some of the legal info. The rest of the legal info is on the bottom of the package. The Turbo Racer is held in place with a two of Mattel's usual plastic twist fasteners and a rattan string. To compensate for the ride height, a set of plastic stands is inserted between the tray and the car. Nothing covers the vehicle, leaving it vulnerable to damage and shelf wear. A folded 4-panel instruction sheet is held inside the tray. The colors and overall style of the package are very appealing, mixing blue, white, and green to give it the appropriate high tech look. There's also no secrets, with the car and its accessory right out in the open. But having it out in the open is asking to get it dirty or damaged, and there's no way to remove it without destroying the package.

The Turbo Racer is primarily cast in a milky white plastic, with transparent blue plastic used for the canopy, missile, and front inserts; silvery gray plastic used for the launcher; and black plastic used for the wheels and chassis. The casting is good, with nice alignment and tight seams around the rear hatches. The soft plastic makes hard edges impossible, but the designers generally did a good job working within the limitations of the material. The only paint used on the car itself is black around the lower front. It's not very sharp, but there's little enough of it to not stick out too badly. The driver is a melty wad of the same milky white plastic as the body, and no pains were made to make the surrounding cockpit look like anything more than the crude inner support structure of a toy. Better to leave the canopy closed. The chassis is nicely done, with enough springs, hinges, and reinforcement plates to make this look like a legitimate off-road vehicle. I've already mentioned my distain for hollow tires, and it holds true here as well.

Much like the Battle Force 5. Tangler, the Turbo Racer has ratcheted hinges in the suspension to raise it from "Speed Mode" to Off-Road Mode." Also like the Tangler, the ratchets are inconsistent and feel like they may break while positioning them. They do seat nicely at the two most common angles, at least. The missile launcher is activated by pressing down on the Steel hanging out the back of the vehicle: press him down to open the doors, then press the button on the top of the launcher to fire the missile. It flies about 4' (120cm), and is soft and light enough to not do any damage.

Aside from the name (it was called a "Turbo Car" in the series), this is a pretty accurate representation of Max's ride. The way the rear doors and missile(s) work isn't quite accurate, but the thought is there and the clever way everything fits together helps offset the inaccuracy. The size of the driver puts this right around 1/24.

Mattel released a 1/64 Turbo Car in their 2014 Hot Wheels line, but this larger version flew under the radar for most of its life. Which is too bad, because it's actually a cool toy that's well made and has an unobtrusive action feature. The Jet Racer was a decent if somewhat unecessary toy, but the Turbo Racer is definitely a worthwhile addition to the collection.